Constructed by: Sande Milton & Jeff Chen
Edited by: Will Shortz 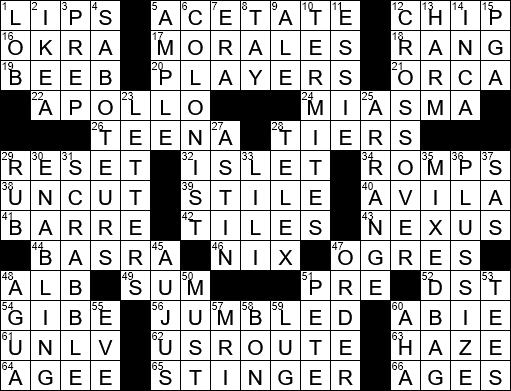 Themed answers relate to the word game SCRABBLE. Three answers are anagrams of each other, or a “MIXED BAG”:

Four more answers are words made by rearranging the letters in four racks of SCRABBLE tiles, just like PLAYERS ARRANGE JUMBLED LETTERS in a real game:

1. Loose ones sink ships, in a saying : LIPS

“Loose lips sinks ships” is used as a warning that unguarded talk can be dangerous. The phrase originated during WWII when it was coined by the US War Advertising Council for use on posters.

An acetate is a transparency used on a projector onto which one can write or draw. It is called an acetate because it is usually made out of cellulose acetate.

Evo Morales has been President of Bolivia since 2006. Morales has a socialist agenda, and as such his government is a close ally to the regimes in Venezuela and in Cuba.

Shamu was the name of the third orca (aka “killer whale”) ever to be featured in a public exhibition. Shamu starred in a popular SeaWorld show in San Diego in the sixties. After she died in 1971, her name lived on as the name “Shamu” is still used by SeaWorld for its killer whale shows. That original Shamu was retired after she grabbed and refused to let go of the leg of one of her trainers.

The Apollo Theater in the Harlem district of Manhattan, New York was opened in 1914 as Hurtig and Seamon’s New Burlesque Theater. The original facility was a whites-only venue. When it was opened to African Americans in 1934, the name was changed to the Apollo.

A magic square is a series of numbers arranged in a square so that all lines of numbers, including diagonals, add up to the same total. Such squares have been used for centuries to create talismans designed to bring good luck.

Arizona and Hawaii are the only two states in the US that do not observe daylight saving time (DST), having opted out when the Uniform Time Act was passed by the US Congress in 1966. Some Native American nations in Arizona observe DST, and some don’t. As a result, times can change back and forth a few times while driving across Arizona during the summer.

The University of Nevada, Las Vegas (UNLV) sports teams are called the Rebels and the Lady Rebels, or in the case of the men’s basketball, the Runnin’ Rebels.

Tommie Agee was a Major League Baseball player who played mainly with the Indians, White Sox and Mets. He was one of the “Amazin’ Mets”, and was famous for making two phenomenal catches in game three of the 1969 world series, potentially saving five runs. Agee was also the first Mets outfielder to win a Gold Glove, doing so in 1970.

There is a story that disgruntled textile workers would kick their wooden shoes, called sabots, into the looms in order to disable them so that they didn’t have to work. This act of vandalism was named for the shoe, an act of … sabotage.

Essie Cosmetics is a company that was founded by Essie Weingarten, and which is now owned by L’Oreal. Apparently, Queen Elizabeth II will only wear Essie’s Ballet Slippers color nail polish. Well, that’s what Wikipedia claims …

The Incas built almost 25,000 miles of road, and much of that roadway system persists to this day. The most famous section is known as the Inca Trail to Machu Picchu. The backbone of the system is formed by two north-south routes, one running along the west coast of the continent, and the other running relatively parallel, further inland.

Telex grew out of the world of the telegraph. What Telex brought to telegraphy was the ability to route messages. Instead of having to talk to an operator to route a particular message to the intended party, the user of a telex could route the message directly to another telex machine by way of a rotary dial, very similar to that on a telephone.

“Lili” is 1953 musical film starring Leslie Caron in the title role, a naive French orphan girl. A famous song from the movie is “Hi-Lili, Hi-Lo”.

The French term “au jus” is usually translated as “with it’s own juice”.