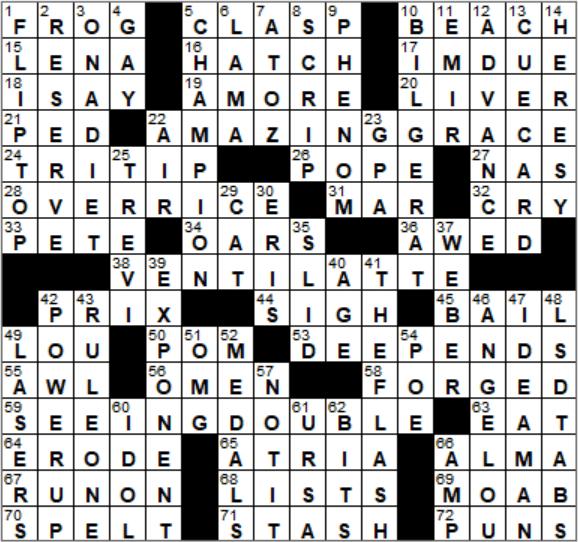 Themed answers are well-known phrases that include a DOUBLE letter. Each answer is clued as if that DOUBLE letter is just a single letter:

The name of the Italian dish “pasta e fagioli” is sometimes pronounced as “pasta fazool” here in the US, as “fazool” sounds like the word for “beans” in the Neapolitan language. Pasta e fagioli comprises pasta and beans, cooked with olive oil, garlic, minced onion, spices and stewed tomatoes. There’s a famous line in the Dean Martin classic “That’s Amore” that goes:

When the stars make you drool, just-a like pasta fazool, that’s amore.

I am not a huge fan of reality television, but I do watch “The Amazing Race” (usually while writing posts for this blog on my laptop!). I love to travel, and enjoy seeing the teams traverse the globe. The show’s host is Phil Keoghan. From his accent, I always thought that Keoghan was from the Boston area. He’s actually from New Zealand! Shows you how much I know about American accents …

Rapper Nas used to go by another stage name, “Nasty Nas”, and before that by his real name, “Nasir bin Olu Dara Jones”. Nas released his first album “Illmatic” in 1994, and inventively titled his fifth studio album “Stillmatic”, released in 2001. Not my cup of tea, I would say …

To caterwaul is a utter long cries, to “wail” like a “cat”.

49. Costello of Abbott and Costello : LOU

Moab is a city in eastern Utah that attracts a lot of visitors each year, mainly those heading for Arches and Canyonlands National Parks, which are nearby.

Canyonlands is a magnificent National Park in southeast Utah located not far from Moab. The canyons in the park, and the associated mesas and buttes, were formed mainly by the Colorado and Green Rivers.

Both “spelled” and “spelt” are valid past tenses for the verb “to spell”, although the former is way more common on this side of the Atlantic. I grew up with “spelt” on the other side of the pond, but its usage is rapidly being replaced by “spelled” in the UK and Ireland.

1. Cap on many a shampoo bottle : FLIP TOP

The word “shebang” is probably a derivative of “shebeen”, an Irish word for a “speakeasy”, an establishment where liquor was drunk and sold illegally. In English “shebang” was originally a “hut” or a “shed”. Just how this evolved into the expression “the whole shebang”, meaning “everything”, is unclear.

30. She threw the apple of discord, in Greek myth : ERIS

In 1952, George Stephen was working for the Weber Brothers Metal works in Chicago. One of the company’s products was a line of half-spheres that were welded together to make buoys used in Lake Michigan. Stephens took two of these metal hemispheres and converted them into the original kettle grill. The Weber company set up a barbecue division that Stephens ran, and Stephen became so successful that he bought out the Weber Brothers factory and converted all production to the manufacture of grills.

41. Superhero with super speed : THE FLASH

Maya Angelou is an African-American autobiographer and poet. Angelou recited her poem “On the Pulse of Morning” at the inauguration of President Clinton in 1983. Here are some words of wisdom from the great lady:

48. Beginnings of some trips : LSD TABS