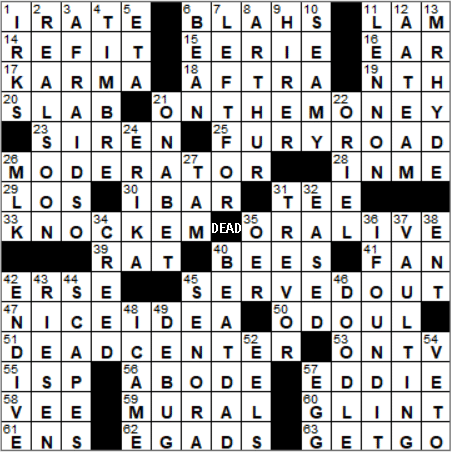 Themed answers incorporate the word “DEAD” that is assumed to occupy the black square at the CENTER of the grid:

16. Something found near a temple : EAR

Karma is religious concept with its basis in Indian faiths. Karma embraces the notion of cause and effect. Good deeds have good consequences at some later point in one’s life, one’s future life, or one’s afterlife. And, bad deeds have bad consequences.

The American Federation of Television and Radio Artists (AFTRA) was founded in 1937 as AFRA. AFTRA merged with the Screen Actors Guild (SAG) in 2012, forming SAG-AFTRA.

”Mad Max: Fury Road” is a 2015 film in the “Mad Max” series, one that was released a full thirty years after the third installment, “Mad Max Beyond Thunderdome”. The title character was played by Mel Gibson in the first three movies, with Tom Hardy taking over for the fourth film. I must admit, I’m not a “Mad Max” fan …

“You’ve Got a Friend in Me” is the theme song for the “Toy Story” series of animated films from Pixar. The song was written and first recorded by Randy Newman for the original “Toy Story” movie, with cover versions being used in subsequent releases.

The Los Angeles Police Department (LAPD) is the third largest local law enforcement agency in the country, after New York PD and Chicago PD. Among other things, LAPD is famous for creating the first Special Weapons and Tactics (SWAT) team in the US, in 1965.

There are many, many colorful theories for the origins of the expression “break a leg” that’s used in the world of theater to mean “good luck”. Regardless of the origin, what is clear is that using the phrase “good luck” is considered to be very “bad luck”.

Lefty O’Doul was a baseball player and manager from San Francisco. O’Doul was instrumental in spreading the popularity of the sport in Japan both before and after WWII. In fact, the Tokyo Giants were named by O’Doul, a reference to the New York Giants franchise with whom he spent the last years of his playing career. O’Doul also owned a restaurant in San Francisco that bears his name and which still operates today (near Union Square). There’s a bridge near AT&T Park, the Giant’s relatively new ballpark, that’s called Lefty O’Doul Bridge.

Diego Rivera was a Mexican painter, famous for his murals. His wife was the equally famous Mexican artist Frida Kahlo.

Half of the letters in the word “none” are letters N (ens).

Endive is a leaf vegetable belonging to the chicory genus, and is in the daisy family. Endive is also known as escarole.

Riesen is a brand of chocolate that is produced and sold mainly in Germany, but is also sold here in the US. Riesen introduced a recipe for a hot chocolate drink in 2007. The recipe calls for melting the chocolate candy over heat in a saucepan, then adding one cup of milk per candy piece. Sprinkle nutmeg to taste.

The oft-quoted statement “Veni, vidi, vici” (“I came, I saw, I conquered”) is believed by many to have been written by Julius Caesar. The words date back to 47 BC and refer to the short war between Rome and Pharnaces II of Pontus.

The verb “veto” comes directly from Latin and means “I forbid”. The term was used by tribunes of Ancient Rome to indicate that they opposed measures passed by the Senate.