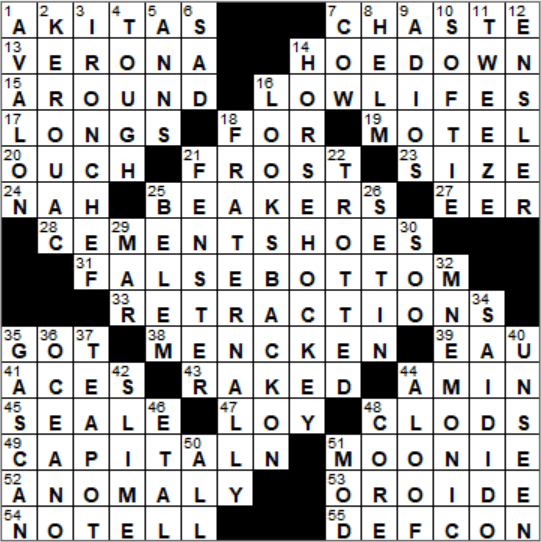 38. Who once described puritanism as “the haunting fear that someone, somewhere, may be happy” : MENCKEN

A despot is a ruler with absolute power, often one who wields that power oppressively. “Despot” is an old French term from the 14th century, ultimately derived from the Greek “despotes” meaning “master of a household, absolute ruler”.

Avalon is a legendary island featured in the Arthurian legends. The name Avalon probably comes from the word “afal”, the Welsh word for “apple”, reflecting the fact that the island was noted for its beautiful apples. Avalon is where King Arthur’s famous sword “Excalibur” was forged, and supposedly where Arthur was buried.

The term “beatnik” was coined by journalist Herb Caen in 1958 when he used it to describe the stereotypical young person of the “beat generation” that was oft associated with the writer Jack Kerouac.

St. Ann’s Bay is on the northern coast of Jamaica.

7. Image on every carton of Ben & Jerry’s ice cream : COW

Eve Ensler is a playwright whose most famous work is “The Vagina Monologues”. When Ensler was only 23 years of age she adopted a 15 year old boy. We are familiar with that boy on the big screen these days, i.e. actor Dylan McDermott.

25. Brazilian city at the mouth of the Amazon : BELEM

Belém is the capital city of the state of Pará in northern Brazil. Belém was founded by the Portuguese in 1616 and was the the first European colony on the Amazon river. “Belém” is the Portuguese word for “Bethlehem”.