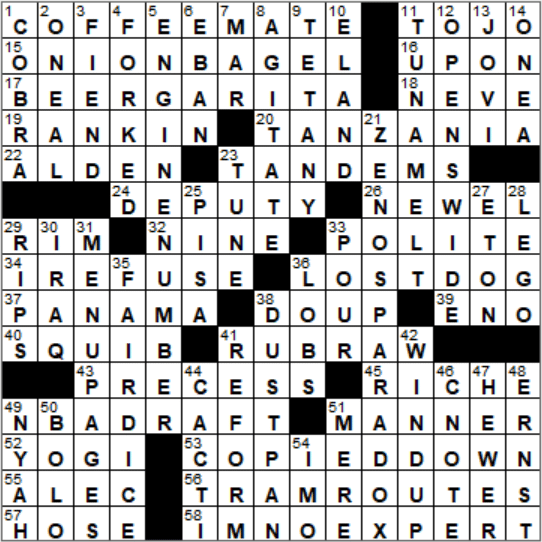 11. Leader among the Axis powers : TOJO

Hideki Tojo was a general and the Prime Minister of Japan during most of WWII. Although the attack on Pearl Harbor was planned before he took office, Tojo was the Prime Minister who made the decision to declare war on the US. After Japan surrendered, General MacArthur ordered Tojo’s arrest. Tojo attempted to commit suicide by shooting himself in the heart, but missed. There is a story that while recovering, Tojo was given a set of replacement dentures that were made by an American dentist. Apparently the dentist drilled the message “Remember Pearl Harbor” into the teeth in Morse code. Tojo was hanged for war crimes in 1948.

Neve Campbell is a Canadian actress whose big break in movies came with the “Scream” horror film series, in which she had a leading role. I don’t do horror films, so I haven’t seen any of the “Scream” movies. Nor have I seen the TV series “Party of Five” which launched the acting careers of both Campbell and Jennifer Love Hewitt in the nineties.

When the African countries of Zanzibar and Tanganyika merged in 1964, the resulting state was named the United Republic of Tanzania, with “Tanzania” being a portmanteau of “Zanzibar” and “Tanganyika”.

22. John of the Plymouth Colony : ALDEN

John Alden is said to have been the first person to disembark from the Mayflower and to have set foot on Plymouth Rock in 1620. Alden himself was not a Pilgrim as such, and was a carpenter working on the Mayflower before it sailed. He apparently decided to travel with the ship at the last minute, perhaps in pursuit of the passenger who would become his wife, Priscilla Mullens. Alden ended up in a love triangle with Priscilla and Captain Miles Standish, a relationship which is recounted in the Longfellow poem “The Courtship of Miles Standish”. John and Priscilla were the parents of a son, John Alden, who was later to be accused during the Salem witch trials.

A newel is a principal upright post that supports a handrail beside a staircase. Newels are found at the top and bottom of the banister, and sometimes in between. Newels are often adorned with decorative trim to set them apart from the other posts by the staircase.

A CBer is someone who operates a citizens’ band (CB) radio. In 1945, the FCC set aside certain radio frequencies for the personal use of citizens. The use of the Citizens’ Band increased throughout the seventies as advances in electronics brought down the size of transceivers and their cost. There aren’t many CB radios sold these days though, as they have largely been replaced by cell phones.

37. Article of apparel not originating where its name would suggest : PANAMA

Yogi Bear made his debut for Hanna-Barbera in 1958, on “The Huckleberry Hound Show” before he was given his own series. Do you remember that collar that Yogi wore around his neck? That was a little trick from the animators. By using the collar, for many frames all they had to do was redraw everything from the collar up, saving them lots and lots of time. Yogi and Boo Boo lived in Jellystone Park, and made Ranger Smith’s life a misery.

The full name of Thomas Hardy’s 1891 novel is “Tess of the d’Urbervilles” A Pure Woman Faithfully Presented”. When it was originally published, “Tess …” received very mixed reviews, largely because it addressed some difficult sexual themes including rape, and sexual double standards (attitudes towards men vs women). I suppose the most celebrated screen adaptation is Roman Polanski’s “Tess” released in 1979. Polanski apparently made “Tess” because his wife, Sharon Tate, gave him Hardy’s novel as her last act before she was murdered by the Manson family. There is a dedication at the beginning of the movie that just says “To Sharon”.

The dinar is the official currency in many countries, such as Iraq and Serbia. The gold dinar dates back to the early days of Islam, with the name deriving from the Roman currency called “denarius” meaning “ten times” (as it was originally a coin worth ten asses).