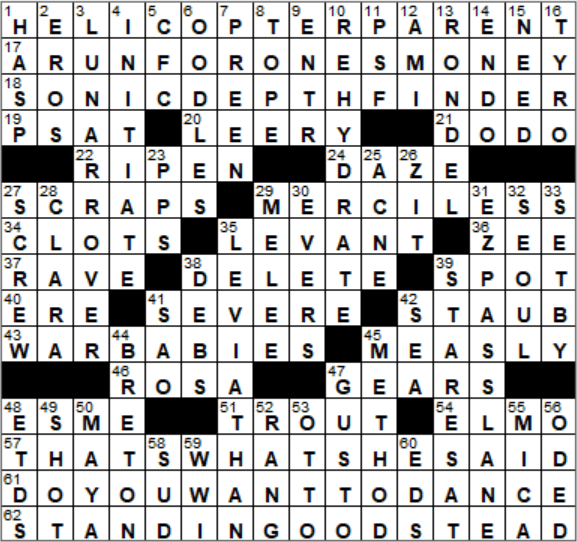 19. College Board offering, for short : PSAT

The Levant is the geographic region that lies east of the Mediterranean, covering modern-day Turkey, Syria, Lebanon, Israel, Palestine, and Egypt. The term is sometimes also used synonymously with the Near East. Syria and Lebanon, when under French rule, were called the Levant States, a name still used at times for the two nations. As one might expect, the word Levant comes from French and was the Middle French word for “the Orient”. The term was used for the Orient as it described lands to the east, where the sun rises (from “lever”, the French word meaning “to rise”). Really, quite interesting …

Constitutional law was brought to Athens and Ancient Greece by a legislator called Draco. The legal code that Draco developed was relatively harsh, which is why we use the term “draconian” to describe unforgiving rules.

Rusty Staub had a relatively long career in baseball, having played his first game at the age of 19 and his last at age 41. Staub was one of only three players who hit home runs in the majors before the age of 20 as well as after the age of 40. The others are Gary Sheffield (never heard of him!) and Ty Cobb (heard of him!).

Back in the 17th century, someone described as measly was affected with measles. The use of “measly” to describe something insultingly small was initially recorded as slang in the mid-1800s.

61. 1958 Bobby Freeman hit covered by the Beach Boys and the Ramones : DO YOU WANT TO DANCE

“Do You Wanna Dance?” was recorded by the Beach Boys in 1965. The song was originally written and recorded as “Do You Want to Dance?” by Bobby Freeman in 1958, and then successfully covered in the UK by Cliff Richards and the Shadows in 1962. However, my favorite version of the song was released by Bette Midler in 1972, a slow and sultry rendition by the Divine Miss M.

2. Love symbol that names another love symbol if you move the first letter to the end : EROS

That would be “rose” becoming “Eros”.

Three countries have sent lunar rovers to the Moon. Famously, the Apollo Lunar Roving Vehicle (aka “moon buggy”) carried American astronauts across the Moon’s surface, on the last three missions of the Apollo program in the early seventies. Before the landing of the Apollo vehicles, the Soviet Union sent two unmanned, remote-controlled rovers to the Moon called Lunokhod 1 & 2. Years later, in 2013, the Chinese landed a lunar rover called Yutu (or “Jade Rabbit”).

8. Have a large quantity of liquor : TOPE

“To tope” is to drink alcohol excessively and habitually.

The germ of a cereal (like wheat and oat) is the reproductive part that germinates and grows into a new plant. A whole grain has three main parts:

E-ZPASS was a technology development driven by (pun!) the tolling agencies of New York, New Jersey and Pennsylvania. The first E-ZPASS toll booth was built on the New York Thruway, and opened at the Spring Valley toll plaza in 1993.

A Breton is a native of Brittany. Brittany is a large peninsula in the northwest of France that is known in French as “Bretagne”.

Mica is a silicate mineral. Thin sheets of mica are transparent and are used in place of glass in certain applications. This form of mica is called isinglass, and as it has a better thermal performance than glass it is a great choice for “peepholes’ in boilers and lanterns. Mica is also used in the electronics industry, making use of its unique electrical and thermal insulating properties.

The city of Lyon in France, is also known as “Lyons” in English. Lyon is the second-largest metropolitan area in the country, after Paris. It is located just to the north of the confluence of the Rhône and Saône Rivers.