Constructed by: Rachel Maddow and Joe DiPietro
Edited by: Will Shortz 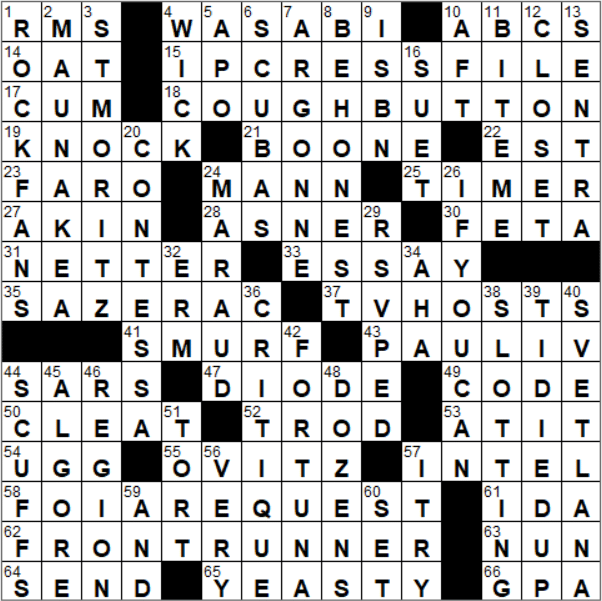 Today’s Theme (according to Bill): Maddowisms

This puzzle is a collaboration by Rachel Maddow, the host of MSNBC’s “The Rachel Maddow Show,” working together with Joe DiPietro, a bar owner in New York City. This is Joe’s 129th crossword for The Times.
More information about the making of today’s puzzle appears in the Times’s daily crossword column (nytimes.com/column/wordplay).

Today’s grid includes several clues and answers that are related to the career of TV host and political commentator Rachel Maddow:

Bill’s time: Did not finish!

Bill’s errors: Several in the northwest of the grid

Wasabi peas are peas that have been fried and then coated with wasabi powder mixed with sugar, salt and oil. They are a crunchy snack, and a favorite of mine …

Boone County, Kentucky was founded in 1798, and is named for frontiersman Daniel Boone. Located on the border with Ohio, Boone County is home to Cincinnati/Northern Kentucky International Airport.

Thomas Mann was a German novelist whose most famous work is probably his novella “Death in Venice”. That book published originally in German in 1912 as “Der Tod in Venedig”. The story was famously adapted for the big screen in 1971, in a movie starring Dirk Bogarde.

“Doctor Faustus” is a novel by Thomas Mann first published in 1947. It is a retelling of the legend of Faust, but set in Germany in the first half of the 20th century.

Ed Asner is most famous for playing the irascible but lovable Lou Grant on “The Mary Tyler Moore Show” and on the spin-off drama “Lou Grant”. Off-screen Asner is noted for his political activism. He served two terms as president of the Screen Actors Guild, and was very involved in the 1980 SAG strike. When “Lou Grant” was cancelled in in 1982, despite decent ratings, there was a lot of talk that the cancellation was a move by the network against Asner personally. In fact, one of Asner’s activist colleagues, Howard Hesseman (who played Johnny Fever) found that his show “WKRP in Cincinnati” was also canceled … on the very same day.

The classic New Orleans cocktail known as a Sazerac is a mixture of rye, absinthe, bitters and sugar. The use of rye is a little incongruous, given that the cocktail is named for Sazerac de Forge et Fils brand of Cognac that was originally the base spirit.

Sean Hannity is a conservative political commentator who is perhaps best known from his syndicated radio broadcast called “The Sean Hannity Show”. Hannity also host the news show called “Hannity” on the Fox News Channel. Hannity has written a few bestselling books, including “Let Freedom Ring: Winning the War of Liberty over Liberalism”.

When MSNBC launched “All in with Chris Hayes”, 34-year-old Hayes became the youngest host of a prime-time show on any of the major cable news channels.

Gargamel is the evil wizard who is the sworn enemy of the Smurfs, the little blue people created by the Belgian cartoonist Peyo. Gargamel is on a quest to capture enough Smurfs so that he could use them as an ingredient in a potion that would turn base metal into gold.

43. Pope when Elizabeth I took the throne : PAUL IV

Severe acute respiratory syndrome (SARS) is a viral disease in humans that went pandemic in 2002/2003. There were over 8,000 confirmed cases, and 12 deaths from the disease during that outbreak. There have been no known cases since 2003, although the disease has not yet been declared as “eradicated”.

Uggs are sheepskin boots that were first produced in Australia and New Zealand. The original Uggs have sheepskin fleece on the inside for comfort and insulation, with a tanned leather surface on the outside for durability. Ugg is a generic term Down Under, although it’s a brand name here in the US.

Michael Ovitz was President of the Walt Disney Company from 1995-1997. He didn’t get on well with the company Chairman Michael Eisner, so Ovitz was fired after just over a year. He was sent packing with a nice severance package though: $38m in cash and well over $100m in stock.

St. Moritz is a pricey resort town in the German-speaking part of Switzerland, and a favorite destination of the rich and famous. “Moritz” is the German for “Maurice”.

There have been 10 Winter Olympic Games held in the Alps:

The Meuse-Argonne Offensive (also called the Battle of the Argonne Forest) was an Allied offensive along the entire western front that took place in the last few weeks of WWI. Fought by US and French forces against the Germans, the offensive was the biggest operation launched by the American Expeditionary Force in WWI. The Meuse-Argonne was the deadliest battle in US history, as 26,277 US soldiers lost their lives.

In Old French a “clos” was an enclosure, with the diminutive form “closet” describing a small enclosure or private room. Over time this evolved into our modern usage, to describe a cabinet or cupboard.

The Nissan Sentra is sold as the Nissan Sunny back in Japan.

Figaro is the title character in at least two operas: “The Barber of Seville” (“Il barbiere di Siviglia”) by Rossini, and “The Marriage of Figaro” (“Le nozze di Figaro”)by Mozart. The two storylines are based on plays by Pierre Beaumarchais, with one basically being a sequel to the other.

George W. Bush won the 2000 US presidential election over Al Gore despite losing the popular vote. The result of the electoral college effectively came down to disputed votes cast in Florida. The US Supreme Court decided that these votes were to be awarded to Bush. President Bush wasn’t the first candidate to take the office without winning the popular vote. Three earlier presidents came to office in the same way: John Quincy Adams (1824), Rutherford B. Hayes (1876) and Benjamin Harrison (1888). Donald Trump repeated the feat in the 2016 election.

48. More than half of scores : DOZENS

Our word “dozen” is used for a group of twelve. We imported it into English from Old French. The modern French word for twelve is “douze”, and a dozen is “douzaine”.