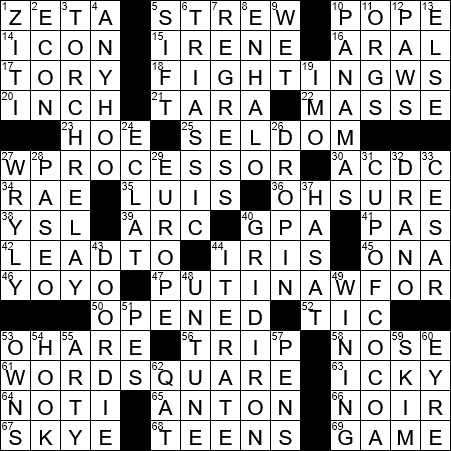 Vernon and Irene Castle were a husband-wife team of ballroom dancers who regularly performed on Broadway at the start of the 20th century. The Castles have been credited with creating or at least popularizing the dance called the “foxtrot”.

The Karakum Desert is located in Turkmenistan in Central Asia, covering about 70% of the country. It is bordered to the north by the infamous Aral Sea, the southern part of which continues to dry out. As such, the Karakum is expanding in size.

Jorge Luis Borges was an Argentine writer and poet from Buenos Aires. By the time Borges was in his early thirties, he was published many times. However, he had not achieved sufficient success to support himself as a writer, and so started a career as a public lecturer. Around this time, Borges garnered more attention through his speaking, but also started to lose his sight. He was to become completely blind in his late fifties. It has been suggested that this progressive blindness gave him a particularly unique writing style, one that was to bring him a lot of celebrity and respect. One of Borges’ more famous quotations is, “I have always imagined that paradise will be a kind of library”.

“Haute couture”, literally “high dressmaking” in French, is a name given to the creation of exclusive fashions. A couturier is someone who creates or sells such fashions.

53. Where many people make connections : O’HARE

O’Hare International is the fourth busiest airport in the world. The original airport was constructed on the site between 1942 and 1943, and was used by the Douglas Aircraft Company for the manufacture of planes during WWII. Before the factory and airport were built, there was a community in the area called Orchard Place, so the airport was called Orchard Place Airport/Douglas Field. This name is the derivation of the airport’s current location identifier: ORD (OR-chard D-ouglas). Orchard Place Airport was renamed to O’Hare International in 1949 in honor of Lieutenant Commander Butch O’Hare who grew up in Chicago. O’Hare was the US Navy’s first flying ace and a Medal of Honor recipient in WWII.

The term “monsoon” was first used in India in the days of the British Raj, when it was used to describe the seasonal winds that brought rain from the Bay of Bengal and the Arabian Sea from June to September. “Monsoon” is derived from the Portuguese “monção”, which in turn comes from the Arabic “mawsim” meaning “season”.

A paseo is a slow stroll or walk taken outdoors. The term comes from the Spanish “pasear” meaning “to take a stroll”.

31. Place for a marshmallow : CUP OF COCOA

32. Product with a pipe on its packaging : DRANO

To clean out drains we might buy Crystal Drano, which is sodium hydroxide (lye) mixed with sodium nitrate, sodium chloride (table salt) and aluminum. The contents of Drano work in concert to clear the clog. The lye reacts with any fats creating soap which may be enough to break up the clog. Also, the finely-divided aluminum reacts with water creating tremendous heat so that that mixture boils and churns, then any hair or fibers are cut by the sharp edges of the nitrate and chloride crystals. Having said all that, I find that boiling water poured down the drain quite often does the job …

We never used the word “gridiron” when I was growing up in Ireland (meaning a grill used for cooking food over an open fire). So, maybe I am excused for taking two decades as a US resident to work out that a football field gridiron is so called because the layout of yard lines over the field looks like a gridiron used in cooking!

60. Literary heroine who says “Even for me life had its gleams of sunshine” : EYRE

62. Chewed stimulant in the Mideast : QAT

Khat (also “qat”) is a flowering plant, the leaves of which are chewed by some in the Horn of Africa and the Arabian Peninsula in particular. The leaves contain an alkaloid called cathinone which stimulates the body like an amphetamine.