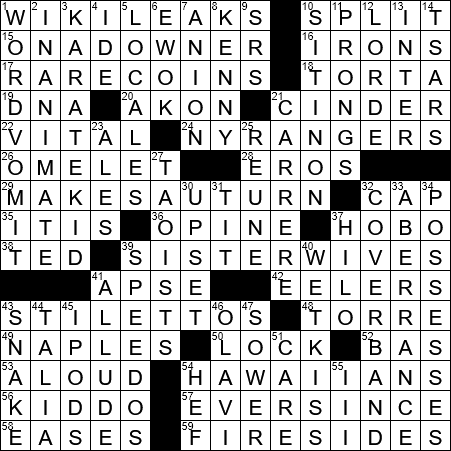 1. Source of embarrassment for some public officials : WIKILEAKS

Julian Assange founded WikiLeaks, the website that is notorious for publishing information provided by whistleblowers. Assange is currently in England and lost an appeal to avoid extradition to Sweden to face charges of sexual assault. Assange entered the Ecuadorian Embassy in London seeking political asylum in 2012. He was granted that asylum and now lives at the embassy.

The New York Rangers is an NHL team. They are one of the oldest teams in the league, having joined in 1926. When the Rangers won the Stanley Cup in 1928, they became the first American team to do so.

The stiletto knife was developed in Italy, and is a knife intended for thrusting and stabbing as opposed to slashing and cutting. The term “stiletto” comes from the Latin “stilus”, which was a thin pointed writing instrument used in Ancient Rome to engrave wax or clay tablets. And, there are also stiletto heels on some women’s shoes, heels that are long and thin.

3. Sobriquet for filmdom’s Daniel LaRusso, with “The” : KARATE KID

A sobriquet is an affectionate nickname. The term is French for “nickname”.

In the card game Seven Card Stud Hi/Lo, the pot is usually split by the highest and the lowest hands.