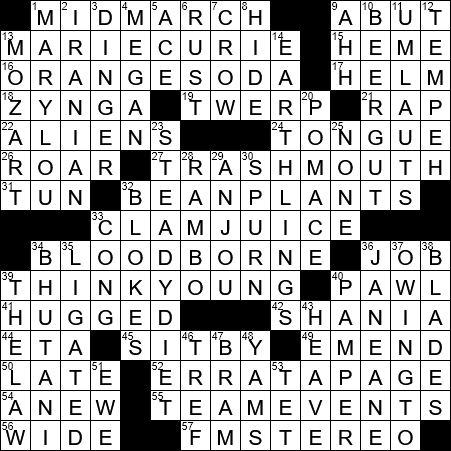 Heme (also “haem”) is an organic structure containing iron, and is a component of hemoglobin, the protein that transports primarily oxygen around the body. It is the “heme” in “hemoglobin” that binds the oxygen atoms.

Zynga is a game developer based in San Francisco. The company’s most famous product is CityVille, a game similar to SimCity in look and feel, but it is “stand alone” i.e. doesn’t require an installation on one’s hard drive and is played in a browser window. Cityville attracts about 14 million game-players every day!

In a ratchet, there’s a rotating gear over which runs a spring-loaded finger, the piece of metal that makes the clicks as the gear rotates. That finger is called a “pawl”.

Shania Twain is a country and pop singer from Windsor, Ontario. Shania’s birth name was Eileen Edwards, and this changed to Eilleen Twain when her mother remarried. Twain changed her name to Shania in the early 1990s, around the same time that her musical career started to take off.

As most people are well aware here in the US (but not us immigrants!), Ricky Nelson started his career playing himself on the radio in “The Adventures of Ozzie and Harriet”, starting in 1949. Soon after he starred in a feature film “Here Come the Nelsons”, and then started recording albums. In an effort to shake his childhood nickname “Ricky”, Nelson officially changed his stage name to “Rick” on his 21st birthday in 1961. Sadly, he was one of the long list (it seems) of singing stars who died in plane crashes. Nelson was traveling on a private plane that he leased on the day after Christmas in 1985 when it crashed just northeast of Dallas. Seven people were killed, including Nelson and his fiancée.

Isfahan is the name of both a province and a city in Iran, and is located in the center of the country.

“Dinger” and “round trip” are familiar terms for a home run in baseball.

6. Feature of many a jalopy : RUST

Pomace (also called “marc”) is the solid material left after a fruit has been pressed to remove the juice. The pomace from grapes can be used to make grappa and grape seed oil.

Bhutan is a landlocked country in South Asia located between China to the north and India to the south, east and west. Bhutan has been a constitutional monarchy since 2008, and has been ranked by “Businessweek” as the “happiest” country in Asia.

35. Tied up, in the operating room : LIGATED

In the context of surgery, a ligature is a suture tied around an anatomical structure, usually around a blood vessel. The term “ligature” comes from the Latin “ligare” meaning “to bind”.

Janeane Garofalo is a stand-up comedian, actress and political activist. On the big screen, she appears in two of my favorite (light) movies: “The Truth About Cats and Dogs” (1996) and “The Matchmaker” (1997). I must admit, I have quite a crush on Ms. Garofalo …

Bram Stoker was an Irish writer best known for the 1897 novel “Dracula”. Stoker’s fame as an author came after his death. During his lifetime he was better known as the personal assistant of renowned English actor Henry Irving. It is believed that Stoker used Irving as his inspiration for the title character in “Dracula”.