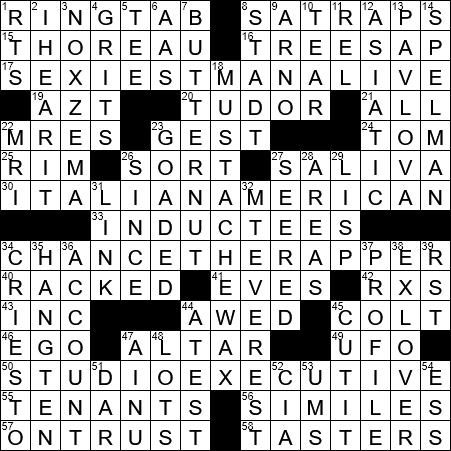 “Satrap” is an old Persian name for a provincial governor. In modern English usage, a satrap is a world leader who is heavily influenced by a superior power.

15. He wrote “In wildness is the preservation of the world” : THOREAU

A marmoset is a small New World monkey. Marmosets are unusual in that they carry two sets of DNA. Marmosets almost always bear fraternal twins, and the reproductive cells of each twin includes DNA from the other twin.

Roy Cohn is a character in the Pulitzer-winning play “Angels in America” by Tony Kushner. The character is based on real-life attorney Roy Cohn, who gained a lot of notoriety during the Second Red Scare.

The Wars of the Roses was a series of civil wars fought for the throne of England between the rival Houses of Lancaster (with a symbol of a red rose) and York (with a symbol of a white rose). Ultimately the Lancastrians emerged victorious after Henry Tudor defeated King Richard III at the Battle of Bosworth Field. Henry was crowned King Henry VII, and so began the Tudor dynasty. Henry Tudor united the rival houses by marrying his cousin Elizabeth of York. Henry VII had a relatively long reign of 23 years that lasted until his death, after which his son succeeded to the throne as Henry VIII, continuing the relatively short-lived Tudor dynasty. Henry VIII ruled from 1509 until his death in 1547. Henry VIII was the last male to lead the the House of Tudor, as his daughter Queen Elizabeth I died without issue. When Elizabeth died, the Scottish King James VI succeeded to the throne as James I of England and Ireland. James I was the first English monarch of the House of Stuart.

Our word “gest”, meaning a great deed or exploit, has been around since about 1300. The term comes from the Old French word “geste” meaning the same thing. These days “geste” can also mean “gesture”.

“Inc.” is a business magazine that specializes in articles about growing companies. “Inc.” publishes a list of the 500 fastest-growing private companies in the country each year, calling it the “Inc. 500”. The “Inc 5000” is an expanded list also published by the magazine.

Colt 45 is a brand of lager that first went on the market in 1963. It has a relatively high alcohol content (6.1%) and so is sometimes referred to as a malt liquor.

Cologne is the fourth largest city in Germany, and is known as “Koln” in German.

Nürnberg (anglicized as “Nuremberg”) is a Bavarian city located north of Munich. Historically it is remembered for the huge Nazi Nuremberg rallies, and the Nuremberg trials that took place at the end of WWII. Nürnberg is sometimes confused with the city of Nürburg in the west of Germany, famous for the Nürburgring race track.

9. It flows near the Piazzale Michelangelo : ARNO

The Arno is the principal river in the Tuscany region of Italy, passing through the cities of Florence and Pisa. Famously the Arno flooded in 1966, the worst flood in the region for centuries. There were numerous deaths and extensive destruction of priceless art treasures, particularly in Florence.

Anna Pavlova was a Russian ballerina who performed in the late 1800s and early 1900s. Pavlova became so successful that she was the first ballerina to pull together her own company and tour the world. Her most famous role was “The Dying Swan” that she danced to the beautiful “Le cygne” from Saint-Saëns’ “Carnival of the Animals”. Pavlova eventually left Russia for good and settled in England.

Spelman College is a women’s college in Atlanta, Georgia that was founded as the Atlanta Baptist Female Seminary in 1881. Spelman is part of the Atlanta University Center, along with the nearby all-male Morehouse College, with which Spelman has a long-standing relationship.

32. Place known to natives as Chomolungma (“goddess mother of the world”) : MT EVEREST

35. Maneuver on a surfboard : HANG TEN

“To hang ten” is a verb used in surfing. A surfer hangs ten when he or she is able to walk forward and hang ten toes over the nose of the board because the back of the board is covered by the wave being ridden.

The Ainu people are an indigenous race found primarily in Japan and parts of Russia close to Japan. The spoken Ainu language has nearly died out, with only a handful of native speakers alive today.

George Tenet was the Director of Central Intelligence (DCI) from 1997 until 2004, making him the second-longest serving DCI in the history of the CIA after Allen Dulles. Tenet served under two very different presidents: Bill Clinton and George W. Bush.