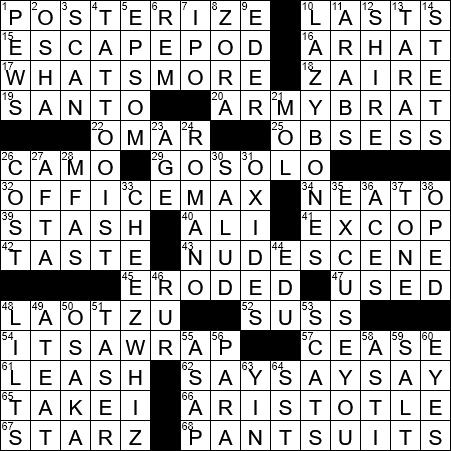 “Arhat” is a Sanskrit word, the exact translation of which is somewhat disputed, with the various Buddhist traditions assuming different meanings. Translations vary from “worthy one” to “vanquisher of enemies”.

The Rumble in the Jungle was the celebrated 1974 fight between Muhammad Ali and George Foreman that took place in Zaire (now the Democratic Republic of the Congo). The fight was set in Zaire because of financial arrangements between promoter Don King and Zaire’s President Mobutu Seko. Ali coined the term “Rope-a-dope” to describe his incredibly successful strategy in the contest. From the second round onwards, Ali adopted a protected stance on the ropes letting Foreman pound him with blows to the body and head, with Ali using his arms to dissipate the power of the punches. He kept this up until the eighth round, and then opened up and floored the exhausted Foreman with a left-right combination. I hate boxing but I have to say, that was an fascinating fight …

Ron Santo was a professional baseball player most noted for his appearances as third baseman for the Chicago Cubs. Santo suffered diabetes, something he managed to keep to himself for most of his playing career. After he retired, the disease necessitated the amputation of both his legs and complications from diabetes eventually contributed to his death.

The character Omar Little is played by Michael K. Williams on the HBO series “The Wire”.

48. Philosopher who said “A journey of a thousand miles must begin with a single step” : LAO-TZU

“Say Say Say” is a 1983 hit song co-written and performed by Paul McCartney and Michael Jackson. The song has a famous music video featuring the singers as two con artists named “Mac and Jack”. While filming the video, Michael visited Paul and Linda McCartney, who were staying on a property called Sycamore Ranch. Jackson liked the Sycamore spread, and a few years later purchased it. He renamed it to “Neverland Ranch”.

65. Co-star with Shatner and Nimoy : TAKEI

William Shatner is a Canadian actor, one famous for playing Captain James T. Kirk in the original “Star Trek” television series. Shatner was trained as a classical Shakespearean actor, and appeared on stage in many of the Bard’s works early in his career. While playing the Kirk character, he developed a reputation for over-acting, really emphasizing some words in a speech and using an excessive number of pauses. He gave his name to a word “shatneresque”, which describes such a style.

The Starz premium cable channel is owned by the same company that owns the Encore cable channel. Starz was launched in 1994 and mainly shows movies.

The Surrey town of Epsom in England is most famous for its racecourse (Epsom Downs), at which is run the Epsom Derby every year, one of the three races that make up the English Triple Crown. We also come across Epsom salt from time to time. Epsom salt is magnesium sulfate, originally prepared by boiling down mineral waters. Epsom was indeed a spa town at one time. The town is also home to Epsom College, an English “public school” (which actually means “private, and expensive”). One of Epsom’s “old boys” was the Hollywood actor Stewart Granger.

R.E.M. was a rock band from Athens, Georgia formed in 1980. The name “R.E.M.” was chosen randomly from a dictionary, apparently.

Linda Eder is a singer and actress. She came to public attention when she won the television talent show “Star Search” for a record 13 weeks in a row. I’ve never heard of her. I know, I lead a sheltered life …

“Jekyll & Hyde” is a stage musical based on the Robert Louis Stevenson novel “The Strange Case of Dr Jekyll and Mr Hyde”. There has been talk of musical film as well …

Ishmael was the first son of Abraham, according to the Bible and the Qur’an. Ishmael’s mother was Hagar, the handmaiden to Abraham’s wife Sarah.

“Romano” is actually an American term, and is used for a selection of hard and salty cheeses that are typically grated. One of these cheeses is the Italian Pecorino Romano, from which we get the more generic term “Romano”.

The name of the element “calcium” comes from the Latin “calcis” meaning “lime”. “Quicklime” is a common name for calcium oxide.

The processed cheese spread called Cheez Whiz was introduced by Kraft in 1952. And believe it or not, it’s still around …

50. City at the mouth of the Yodo River : OSAKA

The Riesling grape variety originated in the Rhine region of Germany, and is used to make wines that are often described as fruity and aromatic. The wine generally has a high level of acidity which makes it ideal for aging, with some examples being proclaimed as excellent at over a hundred-years-old.