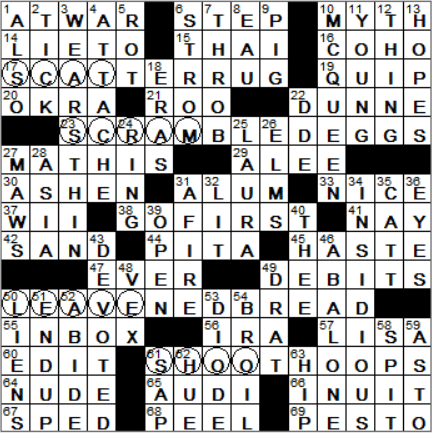 Themed answers each start with a synonym of “GO”, and the letters in those synonyms are circled in the grid:

Irene Dunne was a wonderful Hollywood actress. She played a variety of roles, but I always think of her as the leading lady with Cary Grant in the movies “The Awful Truth”, “My Favorite Wife” and “Penny Serenade”. Irene Dunne was great friends with fellow actress Loretta Young, and the two often attended church together. Dunne is often described as the best actress never to win an Oscar, even though she was nominated five times for the Best Actress Academy Award.

“Leaven” is a substance that causes bread to rise, perhaps yeast or baking powder. The term comes into English via French from the Latin “levare” meaning “to rise”.

The character Phoebe Buffay (and her identical twin sister Ursula) is played on the sitcom “Friends” by the actress Lisa Kudrow. Kudrow plays the ditzy member of the troupe of friends, but I’ve always viewed her as the “smartest” of the group of actors in real life, as best I could tell. Kudrow is behind the US version of the British genealogy show “Who Do You Think You Are?” a very entertaining bit of television.

H-O-R-S-E is a simple game played with a basketball and a hoop. The idea is that one player makes a basket using a certain move and technique, and then subsequent players have to make a basket the same way. Anyone failing to make a basket is assigned a letter in the word H-O-R-S-E, and after five letters, you’re out. A quicker game is called P-I-G.

“Attaché” is a French term which literally means “attached”, and is used for a person who is assigned to the administrative staff of some agency or other service. The term is most recognized as it applies to someone assigned to an Ambassador’s staff at an embassy. The word was extended to “attaché case” at the beginning of the twentieth century, meaning a leather case used for carrying papers. I guess that an attache case might “attached” to an attaché at an embassy …

The Big Bad Wolf is a character in many folklore stories, including “Little Red Riding” and “Three Little Pigs”. Walt Disney’s version of Big Bad Wolf is called Zeke Wolf, and has a son called Li’l Bad Wolf, or just “Li’l Wolf” to his friends.

Steve McQueen is a film director from England who is best known for the 2013 movie “12 Years a Slave”. That movie won the Best Picture Oscar.

Sammy Cahn wrote the lyrics for “High Hopes” for the 1959 film “A Hole in the Head”, and the song won an Oscar that year. Frank Sinatra was the star of the movie, and he recorded the most famous version of the song.

The wonderfully talented actress Laura Linney is a native New Yorker from Manhattan. The performances of hers that I most admire are in “The Truman Show” and “Love Actually” on the big screen, and in the HBO miniseries “John Adams” on the small screen.

Alfred Kinsey sure did create a stir with his work and publications. He founded the Institute for Sex Research in 1947, and published the famous “Kinsey Reports” in 1948 and 1953. I enjoyed the 2004 biopic “Kinsey”, starring Irish actor Liam Neeson in the title role.

In Shakespeare’s “Hamlet”, Ophelia is courted by Hamlet. In Act III, Hamlet is pretty depressed and upset, and addresses Ophelia with the famous line “Get thee to a nunn’ry, why woulds’t thou be a breeder of sinners?” In this scene, Hamlet is denying that he ever loved Ophelia, and exorts her to “become a nun”, so that she may never have to give birth to someone as pitiful and sinful as himself.

The large edible sea snails that we call abalone are called ormer in the British Isles, and is served as “awabi” at a sushi bar. The abalone shell resembles a human ear, giving rise to the alternative names “ear shell” and “sea ear”.

The Middle Eastern dance referred to in Arabic as “Raqs Sharqi” was referred to in French as “danse du ventre” meaning “belly dance”, a reference to the abdominal movements used and the tradition of performing with a bare midriff.