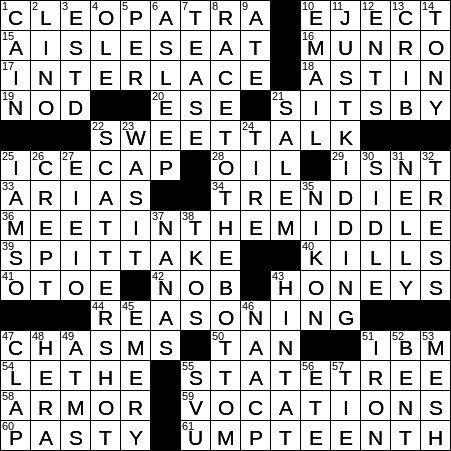 16. Alice with a Nobel Prize in Literature : MUNRO

Elijah Wood is an American actor who is most associated with his role as Frodo Baggins in the “The Lord of the Rings” trilogy.

John D. Rockefeller was an American industrialist whose biggest success came with the Standard Oil Company that he founded and ran for over 25 years. Rockefeller became the richest man in the world, and America’s first billionaire.

54. River of forgetfulness, in myth : LETHE

55. Image on the Maine or South Carolina flag : STATE TREE

58. Some “Monty Python and the Holy Grail” costumes : ARMOR

Linotype printing was the main technology used in the publication of newspapers and magazines for most of the 20th century, up until the 1970s when it was gradually replaced by offset printing and computer typesetting. Linotype printing was so called as a complete “line of type” was produced at one time.

Plaudits are enthusiastic expressions of approval. The term comes from the Latin word “plaudite!”, which was an appeal made by actors for “applause” at the end of a performance.

“To rib”, meaning “to tease”, is a term dating back to 1930 and is probably an extension from “poking someone in the ribs”.

Singer Tony Orlando’s birth name is Michael Cassavitis. He had two hits in 1970 while performing with studio backup singers in an act called Dawn, namely “Candida” and “Knock Three Times”. His greatest success came in 1973 with “Tie a Yellow Ribbon Round the Ole Oak Tree”, which was released by “Dawn featuring Tony Orlando”.

21. State capital that was a boyhood home of Herbert Hoover : SALEM

Remove those creases with an iron.

56. When la Bastille was stormed : ETE

The Bastille is a former fortress in Paris that was used as a prison by the kings of France. On 14 July 1789, an angry mob stormed the Bastille during the French Revolution. The mob was actually after the stores of gunpowder in the fortress, but while inside the building freed seven prisoners and killed the Bastille’s governor. The storming of the Bastille became a symbol of the French Revolution and has been celebrated in France on every July 14th since 1790. That celebration is referred to as “la Fête nationale” in France, but in English-speaking countries it is usually known as “Bastille Day”.