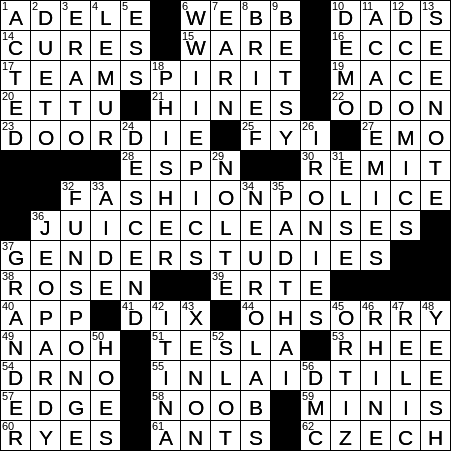 Jim Webb is a former US Senator from Virginia and former Secretary of the Navy in the Reagan administration. He also served as an officer in the US Marine Corps, and is a recipient of the Navy Cross.

“My Two Dads” is sitcom that aired at the end of the 1980s. It’s about two men who are awarded joint custody of a teenage girl. The dads are played by Paul Reiser and Greg Evigan, and the daughter by Staci Keanan. Never saw it …

21. Cheryl of “Curb Your Enthusiasm” : HINES

“Nothing Feels Good: Punk Rock, Teenagers, and Emo” is a 2003 book by Andy Greenwald about the emo music scene. The title comes from a 1997 album called “Nothing Feels Good” by the Promise Ring, an emo band from Milwaukee.

Dorothea Dix was a social activist who lobbied on behalf of the mentally ill, especially those without means. Dix was the driving force behind the construction the first mental asylums in the US.

54. Movie villain whose first name is Julius : DR NO

“Dr. No” may have been the first film in the wildly successful James Bond franchise, but it was the sixth novel in the series of books penned by Ian Fleming. Fleming was inspired to write the story after reading the Fu Manchu tales by Sax Rohmer. If you’ve read the Rohmer books or seen the films, you’ll recognize the similarities between the characters Dr. Julius No and Fu Manchu.

“Noob” is a not-so-nice slang term for a “newbie”, often someone who is new to an online community.

Brno is the second largest city in the Czech Republic (after Prague).

Lemurs are the most unusual-looking creatures, native to the island of Madagascar off the east coast of Africa. With their white fur and dark eyes that are very reflective at night, they have a “ghostly” appearance. Indeed, the animals takes their name from Roman mythology in which “lemures” were spirits of the restless dead.

I thought that the 2001 war movie “Pearl Harbor” was excellent, with some great action sequences. The film is in two parts, as far as the action is concerned. It deals with the attack on Pearl Harbor itself, and then with the amazing Doolittle Raid on Japan.

9. She convinced George to switch to five-pointed stars, in American legend : BETSY

13. What an asterisk may mean : SEE NOTE

The actor Nick Nolte got his big break playing opposite Jacqueline Bisset and Robert Shaw in “The Deep”, released in 1976. Prior to that, he had worked as a model. Nolte appeared in a magazine advertisement for Clairol in 1972 alongside fellow model and future actor Sigourney Weaver.

31. Part of a programmer’s conditional : ELSE

36. Show that once had an April Fools’ Day episode hosted by Pat Sajak : JEOPARDY!

Alex Trebek has been the host of “Jeopardy!” since the syndicated version of the game show launched in 1984. Trebek has missed just one episode since then, when he and host of “Wheel of Fortune” Pat Sajak swapped roles in 1997 as an April Fool’s joke.

Operation Plunder was the primary assault across the Rhine in 1945, as Allied troops brought the ground war into German territory. The assault took four days to complete.