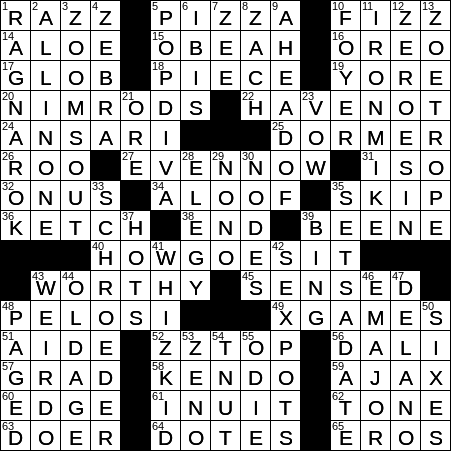 We have a mini-theme today, with three answers at the TOP of the grid including the letter sequence ZZ:

Dirt cake (sometimes “dirt pie”) is a dessert usually made by breaking up Oreo cookies and scattering the pieces over chocolate pudding, and then adding gummy worms on top. Sounds delicious …

Aziz Ansari is an actor and comedian from Columbia, South Carolina who is best known for playing Tom Haverford on the sitcom “Parks and Recreation”. Ansari also stars in the Netflix comedy-drama series “Master of None”.

A dormer is a roofed structure that protrudes from the slope of the main roof.

A ketch is a sailboat with two masts. The most forward mast is the mainmast, and is the taller of the two. The smaller mast is further aft, and is known as the mizzen mast.

Geoffrey Beene was an American fashion designer. He had an impressive list of clients that included First Ladies Lady Bird Johnson, Pat Nixon and Nancy Reagan.

Nancy Pelosi is a former Speaker of the House, the 60th person to hold that position. Ms. Pelosi represents a district not far from here, which covers most of San Francisco. She was the first Californian, the first Italian-American and the first woman to be Speaker of the House. As Speaker, she was also second in line, after the Vice President, to take over if President Obama could not finish his term. That made Nancy Pelosi the highest-ranking female politician in US history.

52. Rock band whose name is suggested by the first row of this puzzle : ZZ TOP

Ajax was a figure in Greek mythology, and was the cousin of Achilles. Ajaz is an important figure in Homer’s “Iliad”. According to Homer, Ajax was chosen by lot to meet Hector in an epic duel that lasted a whole day. The duel ended in a draw.

61. Language from which “kayak” comes : INUIT

“The Garden of Eros” is an 1881 poem by Irish author Oscar Wilde. The first verse is:

It is full summer now, the heart of June,
Not yet the sun-burnt reapers are a-stir
Upon the upland meadow where too soon
Rich autumn time, the season’s usurer,
Will lend his hoarded gold to all the trees,
And see his treasure scattered by the wild and spendthrift breeze.

“P!nk” is the stage name of American singer Alecia Beth Moore. I known so little about “modern” music, but I do like the P!nk song “Just Give Me a Reason” …

The Tappan Zee is a 10-mile stretch of the Hudson River in New York, a place where there is a widening of the waterway. The name comes from the Tappan Native American people and the Dutch word “zee” meaning “sea” or “wide expanse of water”.

8. Galifianakis of “The Hangover” : ZACH

10. Place for an umbrella stand : FOYER

The boxer Mike Tyson, nicknamed “Iron Mike”, has said some pretty graphic things about his opponents. For example:

A zoetrope is a drum-like device with a series of images on the inside, and slits through which the images can be viewed. As the drum is rotated, the images appear to move when viewed through the slits.

“Krona” translates in English as “crown”, and is the currency of Sweden (plural “kronor”). As a member of the European Union, Sweden is required to adopt the euro as its official currency. Such a move isn’t really popular in Sweden and so the Swedish government has been using a legal loophole to allow the country to retain the krona.

Perhaps the most famous elegy in the English language is that written by Thomas Gray, completed in 1750. His “Elegy Written in a Country Churchyard” is the source of many oft-quoted phrases, including:

Schroeder is a favorite character of mine in the comic strip “Peanuts”. He is young boy who constantly plays on a toy piano, especially pieces by Beethoven. Schroeder is also the subject of an extreme infatuation by young Lucy van Pelt, who often leans on his piano and looks at him adoringly as he plays.

A vamp (short for “vampire”) is a seductive woman. The term was first used in reference to the sultry performance of actress Theda Bara in the 1915 film “A Fool There Was”. The movie’s title is a quotation from Rudyard Kipling’s 1897 poem “The Vampire”. Bara’s role was positioned as a “vampire”, a woman out to seduce a man, launching the use of “vamp” as an alternative term for “femme fatale”.

44. What “education is the best provision for,” per Aristotle : OLD AGE

“The Four Seasons” is the most famous work by Italian Baroque composer Antonio Vivaldi. It is a collection of four violin concerti that evoke the seasons of the year. Vivaldi’s “Four Seasons” is a favorite choice for background music in elevators and elevators. Personally, my favorite use of the piece is as a backdrop to the 1981 romantic comedy film “The Four Seasons”, starring Alan Alda and Carol Burnett.

The dice game called Yahtzee was introduced in 1956 and is a variant of earlier dice games, especially the game “Yacht” (which even has a similar name). Yahtzee is required playing in our house at holidays. The game involves the rolling of five dice, with the intent of getting certain combinations. A lot of those combinations resemble poker hands, such as “three of a kind”, “four of a kind” and “full house”.

55. Comics character who once, surprisingly, solved a sudoku puzzle : ODIE