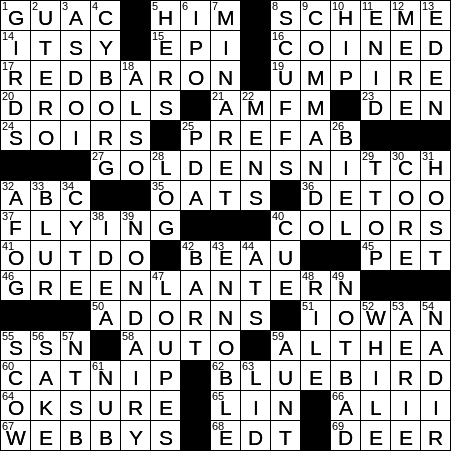 Themed answers are things that FLY, and whose name includes a COLOR:

“Alayhi s-salam” is an Arabic phrase that translates as “peace be upon him”. The phrase is commonly attached to the names of prophets.

The phrase “to pass with flying colors” is a reference to the flying of the flag of a regiment or ship, i.e. the colors.

A swain is a country lad, or a beau. Back in the 12th century, a swain was a young man who attended a knight.

Althea Gibson was known as “the Jackie Robinson of tennis” as she broke the “color barrier” and became the first African-American woman to win a Grand Slam title, in France in 1956. She was quite the athlete and was a great golfer as well as tennis player. She was the first African-American woman to play in the Ladies PGA tour, although she never had a win. Outside of sport, she sang a little and recorded an album, and even appeared in a movie (“The Horse Soldiers”) with John Wayne and William Holden. Sadly, towards the end of her life she ended up destitute and on welfare. When her plight was made known in a tennis magazine, well-wishers from all over the world sent her gifts of money, a total of nearly one million dollars. Quite a story …

60. Something a tabby can’t resist : CATNIP

About 50% of all cats are affected in some way by the plant catnip. There is a terpenoid in the oil of the plant called nepetalactone that the cat inhales and that can cause anything from drowsiness to anxiety.

The “blue bird of happiness” is a phrase coined by Belgian playwright Maurice Maeterlinck in his 1908 play “The Blue Bird”. The bird in question happened to be just that, a bird that was blue. Since then, the phrase has become associated specifically with the bluebird species.

The Webby Awards recognize excellent on the Internet, and have been presented since 1995. One interesting twist in the Webby version of the award ceremony is that (theoretically) recipients are limited to five-word acceptance speeches.

On the other side of the Atlantic, Daylight Saving Time (DST) is known as “summer time”. The idea behind summer/daylight-savings is to move clocks forward an hour in spring (“spring forward”), and backwards in the fall (“fall back”) so that afternoons have more daylight.

1. Prepares, as oneself for battle : GIRDS

4. Half human, half machine : CYBORG

“Cyborg” is an abbreviation for “cybernetic organism”, a being that is made up of both organic and synthetic parts.

7. Part of a mosque from which the call to prayer is made : MINARET

A commando unit is a body of troops specially trained for hit-and-run raids into enemy territory. We imported the term into English from Afrikaans in the early 1800s. We owe the modern usage of “commando” to Winston Churchill, who used it starting in 1940 to describe shock troops whose job it was to disrupt of the planned German invasion of Britain. Churchill was probably familiar with the word from his time as a war correspondent and military officer during the Second Boer War.

Enid Blyton wrote stories for children that were very popular when I was growing up in the British Isles. Not so long ago, I purchased and reread my favorite of her stories growing up, a children’s novel called “The Secret Island”.

29. Roof style of some Corvettes : T-TOP

39. Product label looked for by the lactose intolerant : NON-DAIRY

The National Transportation Safety Board (NTSB) is responsible for the investigation of major accidents involving transportation. Included in this broad definition is the transportation of fluids in pipelines. The organization is independent in that it has no ties to other government agencies or departments so that its investigations can be viewed as “impartial”. The NTSB also earns a little money for the US as it hires out its investigation teams to countries who don’t have the necessary resources available on their own soil.