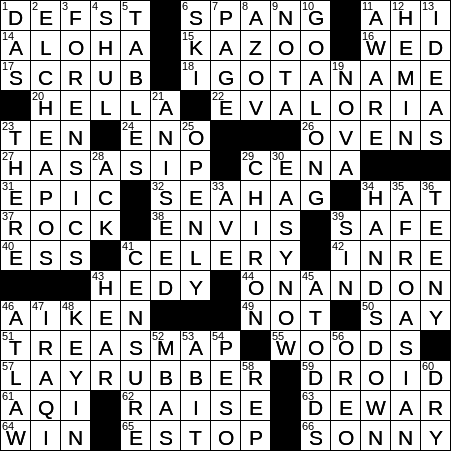 Themed answers include a type of HAND, but that HAND has detoured in the DOWN-direction in the grid:

“Spang” is an informal term (that’s relatively new to me) meaning “precisely, squarely”, as in “spang in the middle of this mess”.

The modern instrument we know today as the kazoo was invented by one Alabama Vest of Macon, Georgia in the 1800s. The kazoo first came to the public’s attention at the Georgia State Fair of 1852, when it was known as the “Down-South Submarine” (because of its shape, I would imagine).

Eva Longoria is a fashion model and actress who had a regular role on TV’s “Desperate Housewives” playing Gabrielle Solis.

“Lux” is a 2012 album released by musician Brian Eno. The album is a collection of ambient music that Eno previously composed as background “soundscapes” for art galleries and airport terminals.

“Environ” is the French word for “round” or “round about”. We use “environ” as a verb in English, meaning to surround, form a circle around. The related plural noun “environs” is used to mean “surroundings, environment”.

The letter S (ess) is the starting letter in the word “self”.

55. Four-time winner of the Masters : WOODS

The golfer Tiger Woods’ real name is Eldrick Tont Woods. “Tont” is a traditional Thai name. Tiger’s father Earl Woods met his second wife Kultida Punsawad in 1966 while on a tour of duty in Thailand.

“Shul” is another name for a synagogue. “Shul” is the term mostly used in Orthodox Judaism, “synagogue” in Conservative Judaism, and “temple” in Reform Judaism.

The Sea of Azov lies east of the Crimean Peninsula and is linked to the larger Black Sea via the narrow Strait of Kerch. The Sea of Azov is the shallowest sea in the world, with the depth never going above forty-six feet.

29. “Wisest and justest of all the centaurs,” in Greek myth : CHIRON

The hunter of Greek mythology called Actaeon was trained by the centaur Chiron, as was Achilles.

The South American country of Colombia takes its name from the Italian explorer Christopher Columbus (“Cristoforo Colombo” in Italian).

56. Treat with a Thins variety : OREO

60. Having less vermouth than the norm : DRY

Vermouth is a fortified wine that is infused with various aromatic flavors. The vermouth that we use today originated in Turin, Italy in the mid-1700s. The various vermouths produced all use a neutral grape wine as a base, with alcohol added to fortify it. Dry ingredients like herbs or roots are added to give a distinctive flavor, and then sugar can be added to make the drink sweeter. Today, most vermouth comes from Italy and France.