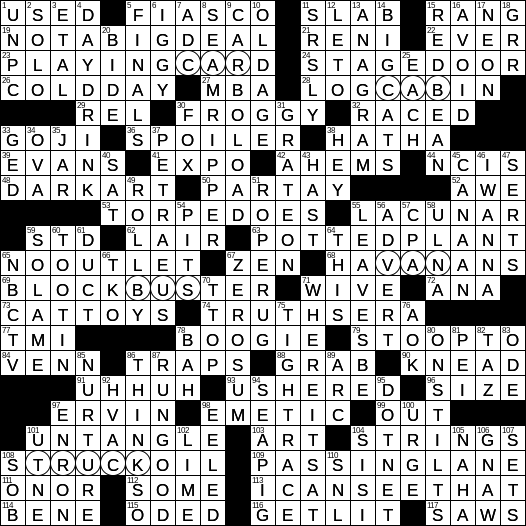 Themed answers require us to DRIVE AROUND a vehicle spelled out in circled letters in the grid. We “pass” those vehicles “on the left”, by continuing the answer on the line above:

Darth Vader is (to me) the most colorful antagonist in the “Star Wars” universe. Born as Anakin Skywalker, he was corrupted by the Emperor Palpatine, and turned to “the Dark Side”. In the original films, Darth Vader was portrayed by English bodybuilder David Prowse, and voiced by actor James Earl Jones. Jones asked that he go uncredited for the first two “Star Wars” films, feeling that his contributions were insufficient to warrant recognition. I disagree …

In the world of “Harry Potter”, Harry’s mother was Lily Potter nee Evans. Lily Evans was born a Muggle. a person who has no magical ability. Lily married someone who did have that magical ability, namely James Potter, Harry’s father.

4. Not wait till evening to crack a bottle : DAY-DRINK

9. What many runners do before a marathon : CARBO-LOAD

13. Nerd’s epithet for the president? : ANAGRAM

“Nerd’s epithet” is an anagram of “the president”.

17. It’s under helium in the periodic table : NEON

General David Petraeus retired from the US military in 2011 after a very distinguished 38-year career. He then took over as the Director of the CIA under President Obama. However, Petraeus resigned from the post just over a year later when it was revealed that he had conducted an extramarital affair with Paula Broadwell, the author of his biography.

67. Like a game with equal winners and losers : ZERO-SUM

A zero-sum game is one in which the gains of the winner are exactly offset by the losses of the loser. There is no net gain. So, a “win-win” situation by definition cannot be arrived at in a zero-sum game.

The John F. Kennedy Presidential Library is a splendid structure located right beside the Boston campus of the University of Massachusetts. President Kennedy chose the location for his library just one week before he was assassinated. The library itself was designed by architect I. M. Pei.

After all the trials following the exposure of fraud at Enron, several of the key players ended up in jail. Andrew Fastow was the Chief Financial Officer. He plea-bargained and received ten years without parole, and became the key witness in the trials of others. Even Fastow’s wife was involved and she was sentenced to one year for helping her husband hide money. Jeffrey Skilling (ex-CEO) was sentenced to 24 years and 4 months. Kenneth Lay (CEO) died in 2006 after he had been found guilty but before he could be sentenced. The accounting firm Arthur Andersen was found guilty of obstruction of justice for shredding thousands of pertinent documents and deleting emails and files (a decision that the Supreme Court later overturned on a technicality). But still, Arthur Andersen collapsed under the weight of the scandal and 85,000 people lost their jobs (despite only a handful being directly involved with Enron).

Naha is located on the island of Okinawa in the very south of Japan. The city is the capital of Okinawa Prefecture, which comprises hundreds of islands in the Ryukyu Arc that extends over 1,000 km towards Taiwan.

Comedian and impressionist Kate McKinnon’s career took off when when she became a cast member of “Saturday Night Live” (SNL) in 2013. Famously, McKinnon portrayed in Hillary Clinton in the run-up to the 2016 presidential election. She also co-starred in the 2016 reboot of the movie “Ghostbusters”, playing Dr. Jillian Holtzmann.