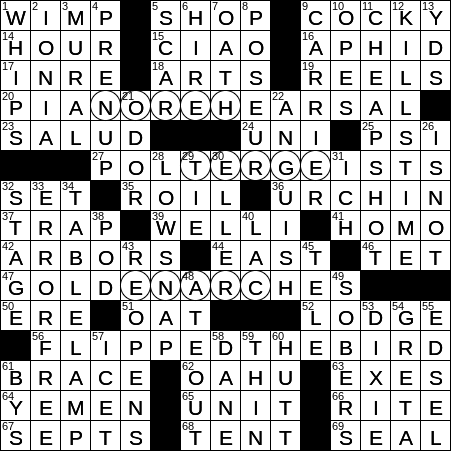 Themed answers include the names of BIRDS as hidden words, but those names are FLIPPED, turned around:

In common parlance, the witching hour is midnight. In the world of the occult, the witching hour last from 3 to 4 in the morning, and is the time at which witches and demons appear and are at their most powerful. This particular hour is chosen as there are no Catholic church services nor prayers called out for that time in the canonical hours.

“Ciao” is the Italian for “‘bye”. “Arrivederci” is more formal, and translates as “goodbye”.

27. Things that go bump in the night : POLTERGEISTS (flipped the EGRET)

A poltergeist is a spirit or ghost that makes its presence known by making noises or by moving objects. The term “poltergeist” is German, coming from “poltern” meaning “to rumble” or “to make a noise”, and “Geist”, the German for “ghost” or “spirit”.

Yemen is located on the Arabian Peninsula, and lies just south of Saudi Arabia and west of Oman. Yemen is the only state on the peninsula that is a republic (its official name is the Republic of Yemen). Everyone over the age of 18 gets to vote, but only Muslims can hold elected office. Yemen has seen many rebellions over the centuries, and has been suffering through a Shia uprising since February 2015.

The geographic region called Ionia is located in present day Turkey. Ionia was prominent in the days of Ancient Greece although it wasn’t a unified state, but rather a collection of tribes. The tribal confederacy was more based on religious and cultural similarities than a political or military alliance. Nowadays we often refer to this arrangement as the Ionian League.

A mural is a painting that is applied directly to a wall or a ceiling. The term comes from the Latin “murus” meaning “wall”.

28. Action that could cause a QB’s fumble : LOW SNAP

Innsbruck is the capital city of the Austrian state of Tyrol. Located in the Alps, Innsbruck is a famous center for winter sports and has hosted two Winter Olympic Games, in 1964 and 1976. The name “Innsbruck” translates as “Inn bridge”, with the Inn being the river on which the city is built.

I remember watching Greta Van Susteren as a legal commentator on CNN during the O. J. Simpson murder trial. She parlayed those appearances into a permanent slot as co-host of CNN’s “Burden of Proof”, before becoming host of her own show on the Fox News Channel called “On the Record”. Van Susteren parted company with Fox in 2016, and apparently that parting wasn’t a happy one. She was immediately replaced on air, without giving her a chance to bid adieu to her TV audience.