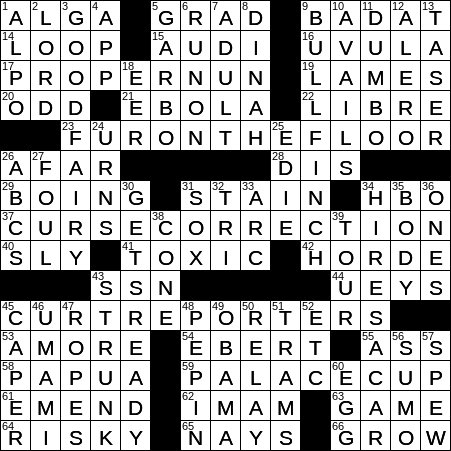 Today’s Theme (according to Bill): OU to U

Themed answers are common phrases in which the letter O has been dropped from the pair of letters OU:

Back in the day, the majority of American-made cars had three forward speeds and the gear shift was mounted on the steering column. Said gear shift is sometimes referred to as “three on the tree”. Around the same time, European-made cars tended to have four forward speeds, and a gear shifter mounted on the floor. That arrangement is known as “four on the floor”. As an aside, I happen to be on vacation in Europe at the moment and am driving a rental car with “six on the floor”. That’s a first for me …

“Westworld” is an HBO series that is based on a 1973 movie of the same name, which was written and directed by novelist Michael Crichton. Westworld is a high-tech theme park populated by androids that interact with the guests.

A horde is a large crowd. “Horde” ultimately derives from the Turkish “ordu” that means “camp, army”.

44. Dangerous things to do at busy intersections : UEYS

Giacomo Casanova was an 18th-century adventurer from Venice. We know so much about him, and his reputation as a womanizer, because he left us his autobiography “Histoire de ma vie” (Story of My Life). A guy recounting stories of his love life and conquests? All true, I am sure …

5. About whom Bette Davis said “Her instinct, her mastery over the machine, was pure witchcraft” : GARBO

8. Alice’s cat in “Through the Looking-Glass” : DINAH

Dinah is Alice’s pet cat, and a companion that she mentions quite often in Lewis Carroll’s “Alice’s Adventures in Wonderland” and in “Through the Looking-Glass, and What Alice Found There”.

The 1941 Disney animated film “Dumbo” was made a year after the feature called “Fantasia” was released. “Dumbo” was largely a commercial venture. The film was made quickly and released in theaters as soon as possible, the idea being to recoup the financial losses incurred by “Fantasia”.

13. Alternative to a truncheon : TASER

43. William who co-wrote “The Elements of Style” : STRUNK

William Strunk, Jr. was co-author of the first editions of “The Elements of Style” back in 1918 (usually referred to as “Strunk & White”). Strunk’s fellow-author was Elwyn Brooks (E. B.) White, the creator of the children’s stories “Charlotte’s Web” and “Stuart Little”.

Strunk & White’s “The Elements of Style” was first published in 1918. “The Elements of Style” is a relatively thin book, when compared to its modern counterpart “The Chicago Manual of Style”. Both books give guidance on the correct use of American English. The Chicago version is one of the most frequently used references on my bookshelf, and a constant reminder of my inadequacies!

49. U.S. president with the most southerly birthplace : OBAMA

Despite rumors to the contrary, Barack Hussein Obama II was indeed born in Hawaii. Future US President Obama was born on August 4, 1961 at Kapi’olani Maternity & Gynecological Hospital in Honolulu, Hawaii.