Constructed by: Jonathan Schmalzbach & Bill Albright
Edited by: Will Shortz 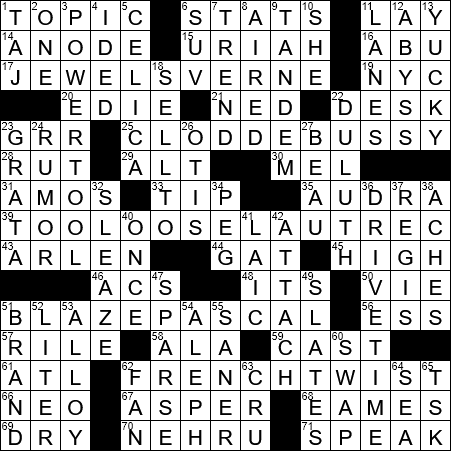 Today’s answers are puns (TWISTS) on the names of celebrated FRENCHMEN, potential nicknames:

14. What a current flows through : ANODE

Uriah Heep is a sniveling insincere character in the novel “David Copperfield” by Charles Dickens. The character is such a “yes man” that today, if we know someone who behaves the same way, then we might call that person a “Uriah Heep”.

17. Nickname for a glitzy author? : JEWELS VERNE (from “Jules Verne”)

22. A cluttered one is a sign of a cluttered mind, it’s said : DESK

25. Nickname for a clumsy composer? : CLOD DEBUSSY (from “Claude Debussy”)

Claude Debussy is one of my favorite composers, and someone who epitomises the Romantic Era and Impressionist Movement in music. One of my favorite CDs is a collection of some “lighter” Debussy pieces called “Debussy for Daydreaming”, and what an evocative collection it is. Included are “Syrinx”, “Maid with the Flaxen Hair”, “Rêverie” and everyone’s favorite, “Clair de Lune”.

Mel Tillis is a country singer who had most of hits in the seventies. Notably, Tillis has a speech impediment, but this does not affect his singing at all.

31. John who played an older Kunta Kinte on “Roots” : AMOS

Not only did Alex Haley author the magnificent novel “Roots”, but he was also the collaborator with Malcolm X on “The Autobiography of Malcolm X”. His 1976 novel “Roots” is based on Haley’s own family history, and he claimed to be a direct descendant of the real life Kunta Kinte, the slave who was kidnapped in the Gambia in 1767. If you remember the original television adaptation of “Roots”, you might recall that Kunta Kinte was played by LeVar Burton, who later went on to play another famous role, Geordi La Forge on “Star Trek: the Next Generation”.

Bay is a reddish-brown color. The term “bay” usually describes the coat of a horse, or a horse with a coat of such a color.

39. Nickname for a sloppy painter? : TOO LOOSE LAUTREC (from “Toulouse Lautrec”)

Harold Arlen is a composer of popular music who will forever be associated with his composition “Over the Rainbow” from the movie “The Wizard of Oz”. Arlen also composed the music to “Come Rain or Come Shine”, “It’s Only a Paper Moon”, “Lydia the Tattooed Lady” and the wonderful “Stormy Weather”.

51. Nickname for a fiery philosopher? : BLAZE PASCAL (from “Blaise Pascal”)

Apparently, French twist is the name of that updo hairstyle where a ponytail is twisted and lifted up to the top of the head and secured with pins or a clip. Not my forte …

2. Start of every ZIP code in Pennsylvania : ONE

“SUV” is an initialism standing for sports utility vehicle, and is a term that was introduced by our marketing friends. Using the phrase “sports utility vehicle” was a very clever way to get us to pay a lot of money for what was essentially a station wagon on a truck chassis, or at least it was back then.

22. Port at the west end of Lake Superior : DULUTH

“Johnny Otis” was the stage name of Ioannis Veliotes, a musician from Vallejo, California. Otis is sometimes referred to as the “Godfather of Rhythm and Blues”.

Regis Philbin is an incredibly popular television personality. Philbin is in such high demand and has had such a long career, that he holds the Guinness World Record for the most time spent in front of a television camera (in excess of 16,000 hours).