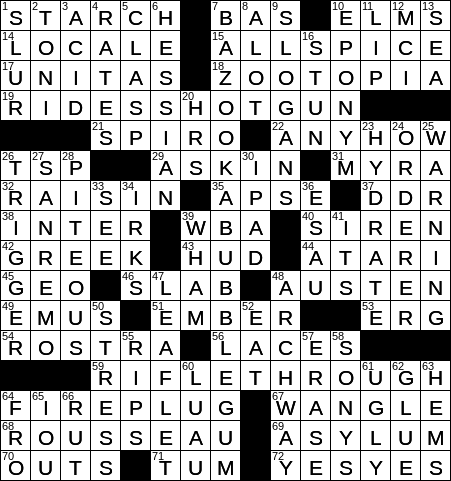 Themed answers each include a weapon that features a TRIGGER:

The spice known as “allspice” was given its name in the early seventeenth century as it flavor was said to resemble a combination of cinnamon, nutmeg and cloves. In fact, allspice is made from dried berries of the Pimenta dioica tree.

Jerk chicken is a Jamaican dish in which the meat is prepared with a hot spice mixture that is used as a marinade or a dry rub. There is a suggestion that the term “jerk” comes from the Quechuan word “ch’arki” meaning “dried, salted meat”. The same Quechuan word is the root of our term “jerky” meaning “lean, dried meat”.

18. Hit 2016 animated film with the tagline “Welcome to the urban jungle” : ZOOTOPIA

Even today, Gore Vidal’s 1968 novel “Myra Breckinridge” is considered controversial. I haven’t read it, but I understand it addresses transsexuality and other sexual practices usually considered to be outside the norm. There was a movie version of the novel made in 1970, with Raquel Welch in the title role.

Ben Carson is a neurosurgeon who made an unsuccessful bid to become the Republican candidate for US president in the 2016 primaries. Subsequently, Carson became Secretary of Housing and Urban Development in President Trump’s administration. He is also a lacto-ovo vegetarian, a decision that Dr. Carson made out of concern for his health.

Actress Anne Hathaway is a favorite of mine, I must say. She starred in “The Devil Wears Prada” in 2006 and in 2007’s “Becoming Jane”, a film I particularly enjoyed.

Henri Rousseau was a French Post-Impressionist painter. He was self-taught, only starting to paint seriously in his forties. He worked as a tax collector until he was 49 years old, when he retired to focus on his art. Rousseau’s most famous painting is “The Sleeping Gypsy”, a celebrated work that depicts a lion standing beside a sleeping woman in the moonlight. You can take a look at it in New York’s Museum of Modern Art.

5. Fastener on a manila envelope : CLASP

Manila folders and envelopes were originally made from manila hemp, hence the name.

6. Mercenary for the British in the Revolutionary War : HESSIAN

The Hessians were German regiments that fought for the British during the American Revolutionary War. They took their name from the homeland of about one third of the men, i.e. Hesse-Kassel.

7. Candy with a comic, once : BAZOOKA BUBBLEGUM

An eponym is a name for something derived from the name of a person, as in the food item we call a “sandwich”, named for the Earl of Sandwich.

ChapStick is a brand of lip balm produced by Pfizer, although it is so popular that the term tends to be used generically. ChapStick was invented way back in the 1880s by a Dr. Charles Browne Fleet in Lynchburg, Virginia.

MCI was a giant telecom company that suffered a similar fate to Enron, and around about the same time. MCI’s stock price fell in 2000 and in maneuvers designed to protect the price, the company committed illegal acts. The larger-than-life CEO back then, Bernie Ebbers, is now serving a 25-year sentence in Louisiana.

A trauma trigger is a stimulus that causes a person to recall some prior psychological trauma. The derivative term “trigger warning” describes an alert at the beginning of a work that warns of content that might be upsetting to some readers or viewers.

Esau, was the grandson of Abraham and the twin brother of Jacob, the founder of the Israelites. When Esau was born to Isaac and Rebekah, the event was described “Now the first came forth, red all over like a hairy garment”. Esau is portrayed later in life as being very different from his brother Jacob, as a hunter and someone who loves the outdoor life.