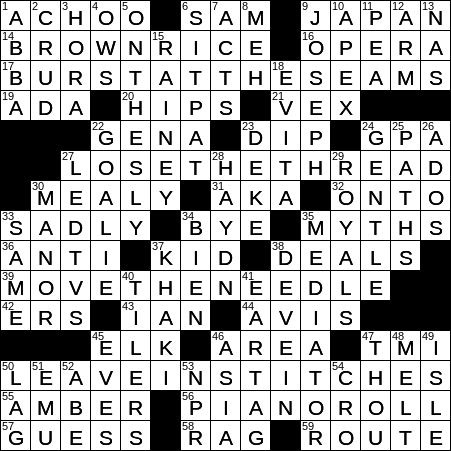 Today’s Theme (according to Bill): This Is Sew Puzzling

Themed answers are common phrases that might be reinterpreted as related to sewing:

Frodo Baggins is a principal character in J. R. R. Tolkien’s “The Lord of the Rings”. Frodo is a Hobbit, and is charged with the quest of destroying Sauron’s Ring in the fires of Mount Doom. Frodo is portrayed by American actor Elijah Wood in Peter Jackson’s film adaptations of the novels.

Hirohito was the Emperor of Japan from 1926 until he died in 1989. Even though he reigned right through WWII, he was not prosecuted for war crimes, which is a decision still much debated among historians.

Blackbeard was the nickname of the celebrated English pirate Edward Teach who plied his trade around the West Indies and up and and down the North American coast.

Ian McEwan is an English novelist with a track record of writing well-received novels. His most famous work of recent years I would say is “Atonement” which has benefited from the success of a fabulous movie adaptation released in 2007.

A stitch is a sudden stabbing pain in the side. We started using the term “stitch” to mean an amusing person or thing in 1968, from the sense of laughing so much that one was in stitches of pain, as in “he had me in stitches”.

“Lord Jim” is a novel by Joseph Conrad that was twice adapted for the big screen. The 1925 silent film version starred Percy Marmont in the title role, and the 1965 version featured Peter O’Toole as the lead.

Rapper Nas used to go by an earlier stage name “Nasty Nas”, and before that by his real name “Nasir bin Olu Dara Jones”. Nas released his first album “Illmatic” in 1994, and inventively titled his fifth studio album “Stillmatic”, released in 2001. Not my cup of tea, I would say …

Ma Rainey was a blues singer, in fact the earliest-known professional blues singer in North America. Born Gertrude Pridgett in 1886, she adopted the stage name Ma Rainey after marrying Will Rainey in 1904.

18. Tony-winning musical with the song “Another Suitcase in Another Hall” : EVITA

“Another Suitcase in Another Hall” is a song from the Andrew Lloyd Webber/Tim Rice musical “Evita”. The song is sung by Juan Perón’s mistress after Eva throws her onto the street. Scottish singer Barbara Dickson recorded the original version, which was released as a single in 1977. Madonna sang “Another Suitcase in Another Hall” in the 1996 film adaptation of “Evita”, even though she played Eva Perón and not the mistress.

Josef Haydn was an Austrian composer, often called the “Father of the Symphony” due to his prolific output of symphonies that helped define the form. This is one of the reasons that he was known, even in his own lifetime, as “Papa Haydn”. Haydn was also the father figure among “the big three” composers of the Classical Period: Haydn, Mozart and Beethoven. Hayden was a good friend to Mozart, and a teacher of Beethoven.

The Kansas City Royals Major League Baseball team was founded in 1969. The team takes its name from the American Royal, a livestock show and rodeo held annually in Kansas City since 1899.

The word “ditto” was originally used in Italian (from Tuscan dialect) to avoid repetition of the names of months in a series of dates. So, “ditto” is just another wonderful import from that lovely land …

37. Material for a military uniform : KHAKI