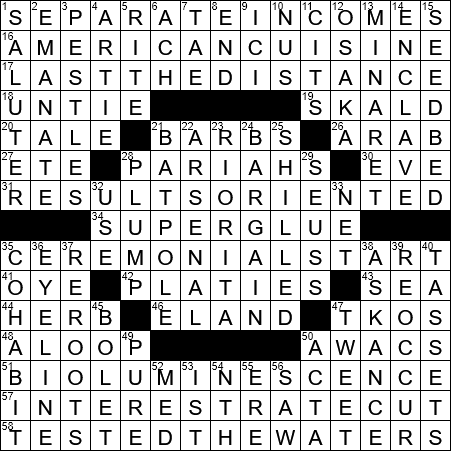 Emeril Lagasse is an American chef who was born in Massachusetts. Lagasse first achieved notoriety as executive chef in Commander’s Palace in New Orleans. Now famous for his television shows, his cuisine still showcases New Orleans ingredients and influences. Lagasse started using his famous “Bam!” catchphrase in order to keep his crew awake during repeated tapings of his show.

“Skald” is a Scandinavian term for a poet, referring in particular to the poets of the Viking Age and the Middle Ages.

Ishmael was the first son of Abraham, according to the Bible and the Qur’an. Ishmael’s mother was Hagar, the handmaiden to Abraham’s wife Sarah.

A windjammer is a very large sailing ship with a metal hull that carried cargo in the 1800s and 1900s. Windjammers had 3-5 masts and large square sails. The term “windjammer” comes from the verb “to jam”, as the large sails were said “to jam” the wind.

47. Some referee calls, for short : TKOS

When the British developed radar in WWII, they also came up with an airborne system that they actually deployed during the war. In 1944 the US Navy commissioned a similar system, and so launched the first American Airborne Early Warning (AEW) system, also before the war was over. The more modern term for the technology is Airborne Warning and Control System, or AWACS for short.

51. The glow of a glowworm : BIOLUMINESCENCE

I’ve always loved the sound of the words “mortar” and “pestle”, ever since I was first introduced to them in the chemistry lab. The Romans called a receptacle for pounding or grinding things a “mortarium”, giving us “mortar”. Mortarium was also the word for the product of pounding and grinding, which gives us our “mortar” that’s used with bricks to build a wall. And further, short stubby cannons used in the 16th century resembled a grinding bowl and so were called “mortars”, which evolved into our contemporary weapon of the same name. As far as the pestle is concerned, it is also derived from its Latin name “pistillum”, which comes from the word for “crush”.

4. “Glee” character in a wheelchair : ARTIE

Artie Abrams is a character in the Fox television show “Glee”. Abrams is played by the young actor Kevin McHale, and is the character who gets around in a wheelchair.

9. Common French word that sounds like two letters of the alphabet : ICI

13. Source of some Mideast calls : MINARET

14. West Berlin used to be one : ENCLAVE

An enclave is a portion of a country, or sometimes a whole country, that is completely surrounded by another.

Our word “arsenal” comes from the Italian “arzenale”, a work adapted from the Arabic for “workshop”. There was a large wharf in Venice called the Arzenale that became associated with the storage of weapons and ammunition, and this led to our contemporary usage of “arsenal”.

The word “magazine” was originally used to denote a place for storing goods, particularly military arms and ammunition, back in the late 1500s. This usage was extended to include packs of ammunition attached to automatic weapons. The first use of “magazine” in the sense of a periodical or journal dates back to 1731, with the publication of “Gentleman’s Magazine”. “Magazine” had come to mean a printed list of military stores, and the idea was that the new periodical was to be a “storehouse” of information.

“Rio Rita” is a 1942 comedy movie that was adapted from a 1927 Broadway musical of the same name by Flo Ziegfeld. Comedy duo Abbott and Costello star as stowaways who get mixed up with Nazi spies.

25. Shamelessly promoted, with “for” : SHILLED

A woman who is described as “zaftig” has a full and shapely figure. “Zaftig” comes from the Yiddish word “zaftik” meaning “juicy”. I am not going to touch this one …

29. Popular author most of whose work is written in anapestic tetrameter : SEUSS

I have never tweeted in my life, and have no plans to do so (but one should never say “never”). Twitter is a microblogging service that limits any post sent to just 280 characters. In a sense, it is similar to this blog. Here I send out a post once a day containing information that I think might be useful to folks (thank you for reading!). I don’t think I could send out much of interest using just 280 characters.