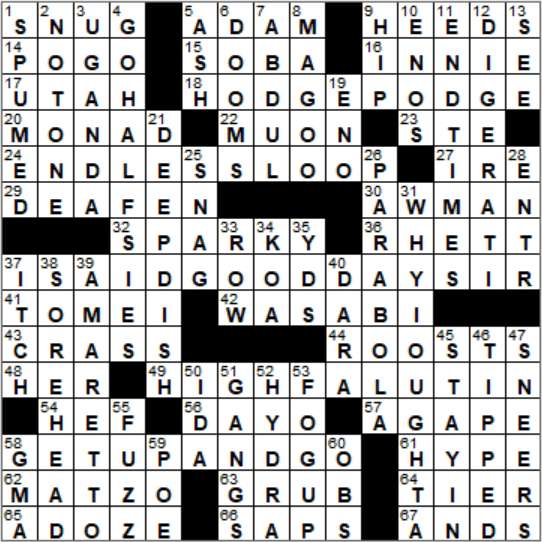 14. Comics character who says “Having lost sight of our objectives, we redoubled our efforts” : POGO

“Pogo” is a comic strip that was launched in 1948, and was the creation of cartoonist Walt Kelly. The story centers on animals that live in the Okefenokee Swamp on the Georgia-Florida border, with the title character “Pogo Possum” being an anthropomorphic opossum.

A monad is a single-celled organism, especially one of the genus Monas, flagellate protozoans.

48. 2013 Best Picture nominee with a major unseen female character : HER

2003’s “Her” is a rather unusual film. It stars Joaquin Phoenix as a man who develops a relationship with a computer operating system called “Samantha”, which is voiced by Scarlett Johansson.

The term “highfalutin” dates back to the mid-1800s. some suggest that it may be a mutation from “high flying”, as “highfalutin” means “haughty” or “pretentious”.

56. Refrain word in the song with the lyric “Come, Mister Tally Man, tally me banana” : DAY-O

“Day-O (The Banana Boat Song)” is a traditional folk song from Jamaica. It is sung from the standpoint of dock workers unloading boats on the night shift, so daylight has come, and they want to go home. The most famous version of “Day-O” was recorded by Harry Belafonte, in 1956.

Matzo is an unleavened bread that is very brittle. The bread is crushed, creating Matzo meal that is then formed into balls using eggs and oil as a binder. The balls are usually served in a chicken stock.

1. Made bubbles, as an ocean wave : SPUMED

Our word “spume” that we use for “froth” comes from the Latin “spuma” meaning “foam”.

3. Setting for “The Last King of Scotland” : UGANDA

“The Last King of Scotland” is a 2006 film adaptation of a 1998 novel of the same name by Giles Foden. The story tells of a Scottish doctor (played by James McAvoy) who was employed by Idi Amin (played by Forest Whitaker). The title of the piece comes from the fact that Idi Amin offered his services as King of Scotland, should he ever be needed.

Leslie Nielsen was a Canadian actor, one famous for playing the zany Sergeant Frank Drebin in “The Naked Gun”. Nielsen’s big break in films came in the innovative comedy “Airplane!”

Brian Eno was one of the pioneers of the “ambient” genre of music. Eno composed an album in 1978 called “Ambient 1: Music for Airports”, which was the first in a series of four albums with an ambient theme. Eno named the tracks somewhat inventively: 1/1, 2/1, 2/1 and 2/2.

If you’ve seen a few of the films starring “The Three Stooges” you’ll have noticed that the line up changed over the years. The original trio was made up of Moe and Shemp Howard (two brothers) and Larry Fine (a good friend of the Howards). This line up was usually known as “Moe, Larry and Shemp”. Then Curly Howard replaced his brother when Shemp quit the act, creating the most famous trio, “Moe, Larry And Curly”. Shemp returned when Curly had a debilitating stroke in 1946, and Shemp stayed with the troupe until he died in 1955. Shemp was replaced by Joe Besser, and then “Curly-Joe” DeRita. When Larry Fine had a stroke in 1970, it effectively marked the end of the act.

Amaretto is an Italian liqueur with a sweet almond flavor. Even though the drink is sweet, it has a bitterness lent to it by the bitter almonds that are often used as a flavoring. The name “amaretto” is a diminutive of the Italian word “amaro” meaning “bitter”.

Tiramisu is an Italian cake. The name “tiramisu” translates from Italian as “pull me up”, and is often translated into our English phrase “pick-me-up”.

The Hydra of Lerna was a mythical sea snake that had multiple heads. Heracles had to slay the Lernaean Hydra as the second of his Twelve Labors. We now use the term “hydra” figuratively to describe a complex problem that presents new obstacles once once facet is resolved.