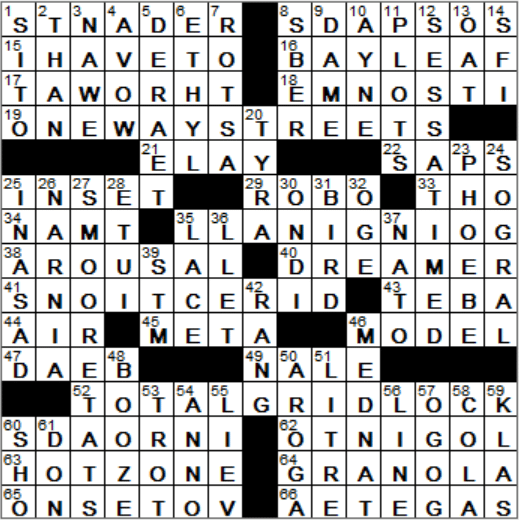 We have mind-bending and TOTAL GRIDLOCK in today’s puzzle. Every other row and every other column have answers written in backwards. We have to write in answer ONE WAY, and then the other. We are GOING IN ALL DIRECTIONS:

Bill’s time: 1h 25m (not including two long breaks to think about it)

Fire ants are stinging ants, and many species are called red ants. Most stinging ants bite their prey and then spray acid on the wound. The fire ant, however, bites to hold on and then injects an alkaloid venom from its abdomen, creating a burning sensation in humans who have been nipped.

S.O.S is a brand name of scouring pads made from steel wool impregnated with soap. The product was invented as a giveaway by an aluminum pot salesman in San Francisco called Ed Cox. His wife gave it the name “S.O.S” as an initialism standing for “Save Our Saucepans”. Note the punctuation! There is no period after the last S, and that is deliberate. When Cox went to register the trademark, he found that “S.O.S.” could not be a trademark because it was used as an international distress signal. So he dropped the period after the last S, and I hope made a lot of money for himself and his wife.

16. Food flavorer that’s not supposed to be eaten : BAY LEAF

A T-man is a law-enforcement agent of the US Treasury (T is for “Treasury”).

The acronym “DREAM” stands for “Development, Relief, and Education for Alien Minors”.

Our word “élan” was imported from French, in which language the word has a similar meaning to ours, i.e “style” or “flair”.

1. Johnny nicknamed “The Godfather of Rhythm and Blues” : OTIS

“Johnny Otis” was the stage name of Ioannis Veliotes, a musician from Vallejo, California. Otis is sometimes referred to as the “Godfather of Rhythm and Blues”.

Nancy Astor (nee Langhorne) was born in the US, in Virginia. When Nancy was 26 years old she moved to England with her younger sister. In England she married an American living there, Waldorf Astor, and the couple lived a very comfortable life. Nancy Astor became very active in English politics, and eventually became the first woman elected to the British Parliament.

10. Artist with the 7x platinum album “A Day Without Rain” : ENYA

23. Holden’s younger sister in “The Catcher in the Rye” : PHOEBE

“Largo” is a instruction to play a piece of music with a very slow tempo. “Largo” is an Italian word meaning “broadly”.

Constantine the Great (aka Constantine I and St. Constantine) was Emperor of Rome from 306 to 337. Constantine was the first Roman Emperor to convert to Christianity, and along with co-Emperor Licinius he proclaimed religious tolerance throughout the Roman Empire. It was Constantine who gave his name to the city of Constantinople (now Istanbul). Also, the famous Arch of Constantine in Rome was built to commemorate one of Constantine’s military victories. This arch that was the model for many famous arches around the world including the Arc de Triomphe in Paris, Marble Arch in London, and the arch in the main facade of Union Station in Washington, DC.

In early Greece, the agora was a place of assembly. The assemblies held there were often quite formal, perhaps for the reading of a proclamation. Later in Greek history, things became less formal as the agora evolved into a marketplace. Our contemporary word “agoraphobia” comes from these agorae, in the sense that an agoraphobe has a fear of open spaces, a fear of “public meeting places”.

Reading is the county town of Berkshire in England. It is a major railroad junction, and the site of a renowned monastery and a prison. Reading Prison was where American actor Stacy Keach spent 6 months in 1984, convicted of smuggling cocaine into the UK.

Jonas Salk was an American medical researcher who developed the first safe polio vaccine. In the fifties, especially after the 1952 epidemic, polio was the biggest health fear in the US because it killed thousands, left even more with disabilities and most of the victims were children. The situation was dire and the authorities immediately quarantined the family of any polio victim, and that quarantine was so strict that in many cases the families were not even permitted to attend the funeral of a family member who died from the disease.