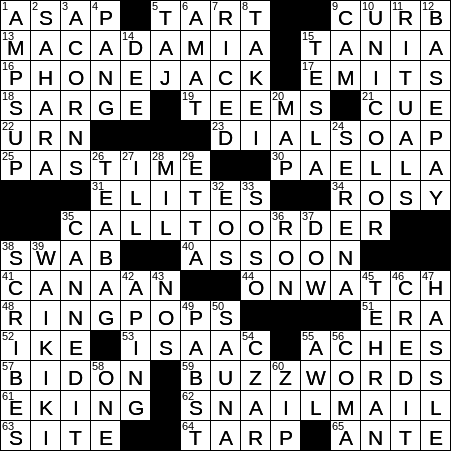 Themed answers each start with a synonym of the WORD “BUZZ”:

The macadamia tree is native to Australia and is largely grown for its fruit, the macadamia nut. The tree was names in 1857 in honor of Scottish-Australian chemist and politician John Macadam. The macadamia was introduced into Hawaii as a commercial crop in the 1920s.

Actress Tania Raymonde’s big break came with a recurring role in “Malcolm in the Middle”, playing Cynthia Sanders from 2000 to 2003. She is better known now for having played Alex Rousseau in the hit TV show “Lost”.

“Lost” is a science fiction drama that originally aired from 2004 to 2010. The show kicks off with a passenger airliner crashing a tropical island as it flies from Sydney bound for Los Angeles. I haven’t seen the show myself and hear that the intriguing plot didn’t really come to a satisfying conclusion. Others would disagree …

Sgt. Snorkel (“Sarge”) is Beetle Bailey’s nemesis in the cartoon strip that bears his name. Snorkel has a dog called Otto that he dresses up to look just like himself. Otto started off as a regular dog, but artist Mort Walker decide to draw him more like his owner, and soon Otto became a big hit.

Dial was the first antibacterial soap introduced in the US. It was given the name “Dial” as it was touted as offering “round-the-clock” protection against any odors caused by perspiration.

Snail mail is regular mail delivered by the postal service. The term “snail mail” arose as email gained in popularity, and is a reference to the difference in speed between email and paper mail.

Tehran is the capital of Iran and is the largest city in the Middle East, with a population of about 8.5 million. Iran has been around a really long time and Tehran is actually the country’s 31st national capital.