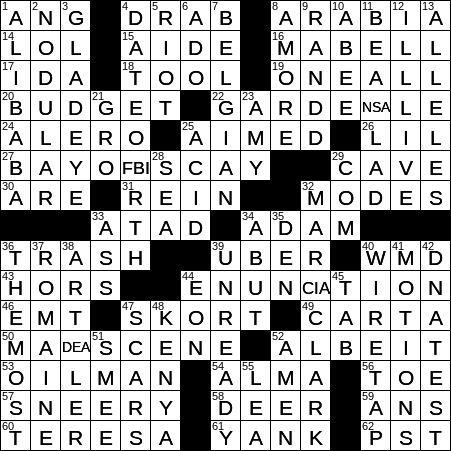 We have a rebus puzzle today, with the names of four undercover organizations squeezed into four squares in the grid:

The American Telephone and Telegraph Company (AT&T, Ma Bell) was a subsidiary of the original Bell Telephone Company that was founded by Alexander Graham Bell, the inventor of the telephone. AT&T was forced to divest several subsidiaries in 1982 when the company lost an antitrust lawsuit. Those subsidiaries were known as Regional Bell Operating Systems, or “Baby Bells”.

We use the term “stooge” these days to for an unwitting victim, or perhaps the straight man in a comedy duo. The first “stooges” were simply stage assistants, back in the early 1900s.

24. Successor to the Cutlass : ALERO

“Li’l” is a little, abbreviated, form of “little”.

27. Outlet for the Loire : BAY OF BISCAY

The Bay of Biscay is the large gulf that sits north of Spain and west of France. The bay is named after the Spanish province of Biscay located in Basque country.

“Hors de combat” is a French term that translates as “outside the fight”. We use it in English to describe soldiers who are incapable of fighting. Examples are those who are sick or wounded, and those who are captured. Military personnel designated as hors de combat are accorded specific rights according to the various laws of war, including the Geneva Convention.

The garment called a “skort” is a hybrid between shorts and a skirt.

The TV soap “Dallas” revolved around the Ewing family. The show that ran for 13 years was originally intended as a five-part mini-series, with the main characters being newlyweds Bobby and Pam Ewing. But, the devious character in the piece, Bobby’s brother J. R. Ewing, became so popular with audiences that the series was extended with J. R. at the center of the story.

Scotts Miracle-Gro Company was founded in 1868 by one Orlando Scott, and initially dols seed to the agricultural industry. In the early 1900s, Scotts started to sell to homeowners, and mainly supplied lawn seed. The company merged with the gardening company Miracle-Gro in 1955.

“Once in Love With Amy” is the best-remembered song to come out of the musical “Where’s Charley?” that debuted on Broadway in 1948.

Frank Loesser was a songwriter who was famous for penning both lyrics and music for the Broadway show “Guys and Dolls” and “How To Succeed In Business Without Really Trying”. Loesser also wrote the marvelous song “Baby, It’s Cold Outside”.

Judge Lance Ito came in for a lot of criticism for his handling of the O.J. Simpson murder trial. The lead prosecutor in that trial was Marcia Clark, you might recall. I read the book that’s Clark wrote about the trial called “Without a Doubt”, and she pointed out one trait of Judge Ito that I think is quite telling. Ito would almost always refer to the prosecutor as “Marcia”, while addressing the men on both sides of the case with the honorific “Mister”.

Romaine is also known as cos lettuce, with the “romaine” name being most common here in North America.

Iceberg lettuce is the most popular lettuce consumed in the US. Also known as “crisphead”, it is considered by many experts to be one of least flavorful varieties of lettuce available. I agree …

Tab was the first diet cola introduced by the Coca-Cola company, in 1963. It was produced as a competitor to the very successful Diet Rite cola that was made by RC Cola. The name “Tab” was used as the beverage was aimed at people who wanted “to keep tabs” on their weight.

Kenya lies on the east coast of Africa, right on the equator. The country takes her name from Mount Kenya, the second highest peak on the continent (after Kilimanjaro). The official languages of Kenya are English and Swahili.