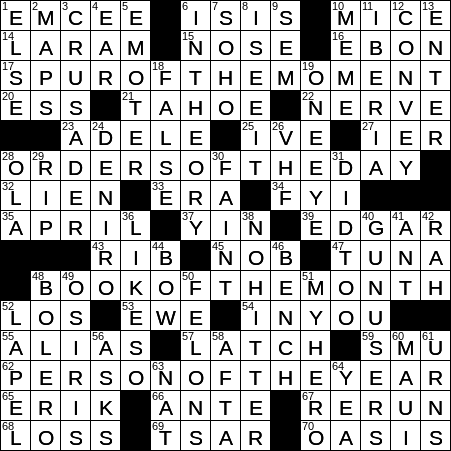 Constructed by: Todd Gross
Edited by: Will Shortz

Today’s Theme (according to Bill): Something of the Time Period

Themed answers are in the format “X of the Y”, where Y is a time period. Those time periods get longer and longer as we descend the grid:

1. Host with a microphone : EMCEE

April Fools’ Day is celebrated on April 1st in the western world. In the US (and Ireland) one can make practical jokes all day long if one wants. But in the UK there is a noon deadline. Anyone pranking after midday is called an “April Fool”.

Edgar Rice Burroughs (ERB) was an author from Chicago who is best known as the creator of the “Tarzan” series of novels. Burroughs’ daughter Joan ended up marrying James Pierce, the actor who was the fourth to portray Tarzan on film. James and Joan Pierce also worked together, playing Tarzan and Jane on the radio show “Tarzan” from 1932 to 1934.

52. Preceder of Alamos or Angeles : LOS

The town of Los Alamos, New Mexico takes its name from the Spanish for “the poplars” or “the cottonwoods”. Famously, it is home to Los Alamos National Laboratory which was founded during WWII to work on the Manhattan Project, the development of the first atomic bomb. The town of Los Alamos didn’t exist as such, until it was planned and constructed to support the employees working on development of the bomb.

The California city of Los Angeles (L.A.) is the second most populous city in the country, after New York. L.A. was established in 1781 as a pueblo named “El Pueblo de Nuestra Señora la Reina de los Ángeles del Río de Porciúncula”, which translates as “The Town of Our Lady the Queen of Angels of the Porciúncula River”. This name evolved into “Los Angeles”, and the Porciúncula River is now called the Los Angeles River.

Vince Gill is a country music singer-songwriter. Gill has been honored with more Grammy Awards than any other male country singer.

Actor Erik Estrada’s big break came with the movie “Airport 1975”, in which he played the doomed flight engineer of a Boeing 747. A couple of years later, Estrada began a six-year gig, co-starring on the television show “CHiPs” as motorcycle police officer Poncherello.

The TV cop show “CHiPs” ran from 1977 until 1983. Stars of the show were Larry Wilcox and Erik Estrada, who played two California HIghway Patrol (CHP) motorcycle officers. I find it interesting that the storylines never once called for the officers to draw their firearms over the six seasons (how shows have changed!). Erik Estrada had to learn how to ride a motorcycle for the show, but wasn’t licensed to drive one during the whole of production. He eventually qualified, but only after three attempts to pass the test.

3. One leading a fight for change : CRUSADER

“Rock-Ola” was a brand name of jukebox. Rock-Ola basically shared the market with Wurlitzer in the heyday of the jukebox. Rock-Ola is still making jukeboxes, and now caters to the “nostalgia market”, producing authentic looking players but using digital recordings and touch-screens for better sound and ease of use.

Although coin-operated music players had been around for decades, the term “jukebox” wasn’t used until about 1940. “Jukebox” derives from a Gullah word, the language of African Americans living in the coastal areas of South Carolina and Georgia. In Gullah, a “juke joint”, from “juke” or “joog” meaning “rowdy, wicked”, was an informal establishment where African Americans would gather and for some music, dancing, gambling and drinking. The coin-operated music players became known as “jukeboxes”.