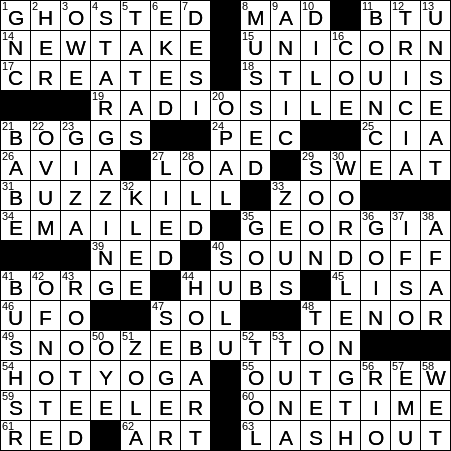 Themed answers each define the result of hitting the SNOOZE BUTTON in the morning:

A rather insensitive person might break off a relationship simply by cutting off all communication with his or her partner, without any warning. Such a move is referred to as “ghosting” in modern parlance, particularly when the relationship relies heavily on online interaction.

In the world of heating, ventilation and air conditioning (HVAC), the power of a heating or cooling unit can be measured in British Thermal Units (BTUs). This dated unit is the amount of energy required to heat a pound of water so that the water’s temperature increases by one degree Fahrenheit.

18. City nicknamed “The Gateway to the West” : ST LOUIS

The city of St. Louis, Missouri was settled by French explorers in 1763. Sitting on the Mississippi River, it grew into a very busy port. By the 1850s, it was the second busiest port in the country, with only New York moving more freight. St. Louis was named for Louis IX of France. Louis was canonized in 1297 by Pope Boniface VIII, and was the only French king to be declared a saint.

21. Wade in the Baseball Hall of Fame : BOGGS

Wade Boggs is a former Major League Baseball player, a third baseman who was noted for his hitting ability.

“Debbie Downer” is a slang phrase describing someone who knows how to bring down the mood. There was a character on “Saturday Night Live” with the name Debbie Downer played by comic actress Rachel Dratch.

Margaret Mitchell’s 1936 novel “Gone with the Wind” earned the author a Pulitzer in 1937. Mitchell started writing the book in 1926 as a way to pass the time while she was recuperating from injuries sustained in a car crash. The title comes from a poem by English writer Ernest Dowson:

I have forgot much, Cynara! gone with the wind,
Flung roses, roses riotously with the throng,
Dancing, to put thy pale, lost lilies out of mind…

Victor Borge was such a talented entertainer. He was nicknamed “The Great Dane” as well as “The Clown Prince of Denmark”. Borge was a trained concert pianist, but soon discovered that the addition of a stand up comedy routine to his musical presentations brought him a lot of work. He toured Europe in the 1930s, and found himself in trouble for telling anti-Nazi jokes, so when Germany occupied Denmark during WWII Borge escaped to America.

The character Phoebe Buffay (and her identical twin sister Ursula) is played on the sitcom “Friends” by the actress Lisa Kudrow. Kudrow plays the ditzy member of the troupe of friends, but I’ve always viewed her as the “smartest” of the group of actors in real life, as best I could tell. Kudrow is behind the US version of the British genealogy show “Who Do You Think You Are?” a very entertaining bit of television.

46. What a weather balloon might be mistaken for : UFO

The Roswell UFO Incident took place in 1947. Some people believe that an extraterrestrial spacecraft crashed, with aliens aboard. After the initial reports the public accepted the US Military’s explanation of the crash, that the debris recovered belonged to an experimental high-altitude surveillance balloon. The whole incident was dug up again over 30 years later when a claim was made that there was a cover-up in 1947, and that the armed forces had recovered an alien craft and brought it to Roswell Army Air Field. “The National Enquirer” ran the story, and it has been running ever since.

Helios was the god of the Sun in Greek mythology. He was the brother of Selene, the goddess of the moon, and Eos, the goddess of the dawn. Helios drove his chariot of the sun across the sky during the day, returning to the East at night be travelling through the ocean. The Roman equivalent to Helios was Sol.

Hurricane Opal was a Category 4 hurricane that inflicted severe damage in 1995, causing devastating flooding in Florida and Alabama, as well as in Guatemala and Mexico. 50 deaths in Central America and 13 deaths in the United States were attributed to the storm. The hurricane was so significant that the name “Opal” was retired in 1996.

There are six letters in the word “dinner”.

The artist Paul Klee was born in Switzerland, but studied art in Munich in Germany. You can see many of Klee’s works in the San Francisco Museum of Modern Art. If you get to Bern in Switzerland, even more of them can be seen at the Zentrum Paul Klee that was opened in 2005. Klee’s most celebrated work is his pointillist painting from 1932 called “Ad Parnassum”, which is owned by the Kunstmuseum, also located in Bern.

33. For whom “it is not possible either to trick or escape the mind,” per Hesiod : ZEUS

Hesiod was a poet from Ancient Greece, one often compared with another famous Greek poet Homer. Hesiod’s most famous poem is probably “Works and Days”, a piece based on the principles that labor is the lot of man, and those willing to work will get by. It’s not a short poem, as it has about 800 verses.

Tasmania is the large island lying off the southeast coast of Australia. The Dutch explorer Abel Tasman was the first European to sail past the island, in 1642. Tasman named his discovery Van Diemen’s Land after the Governor of the Dutch East Indies, Anthony van Dieman. The name was officially changed to Tasmania, after the discoverer himself, in 1856. In Australia a more familiar name used is “Tassie”.

Bob Seger struggled as a performing artist right through the sixties and early seventies before becoming a commercial success in 1976 with the release of his album “Night Moves”. Since then, Seger has recorded songs that have become classics like “We’ve Got Tonight” and “Old Time Rock & Roll”.

The Chicken of the Sea brand of tuna is named for a phrase once used by fishermen for the “meat” from white albacore tuna.

Even though the 2016 Olympic Games was a summer competition, it was held in Rio de Janeiro in winter. As Rio is in the southern hemisphere, the opening ceremony on 5th August 2016 fell in the local winter season. The 2016 games was also the first to be held in South America, and the first to be hosted by a Portuguese-speaking country.

57. Bird whose name is also the initials of a school in Ypsilanti : EMU