Constructed by: Samuel A. Donaldson & Tracy Gray
Edited by: Will Shortz 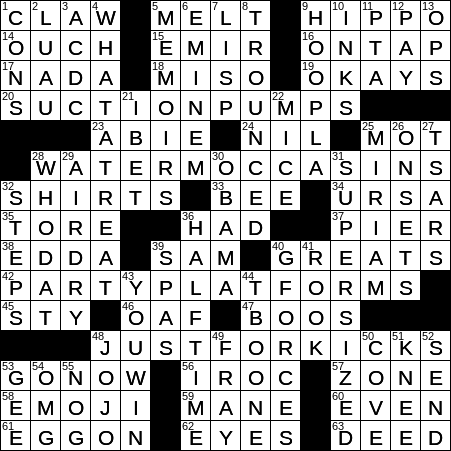 Today’s themed answers are common phrases that have been reinterpreted as specialized shoes purchased by a type of “professional” mentioned in the clue, JUST FOR KICKS:

9. One wallowing in a zoo pond : HIPPO

An emir is a prince or chieftain, most notably in the Middle East. In English, “emir” can also be written variously as “emeer, amir, ameer” (watch out for those spellings in crosswords!).

Miso is the name of the seasoning that makes the soup. Basic miso seasoning is made by fermenting rice, barley and soybeans with salt and a fungus to produce a paste. The paste can be added to stock to make miso soup, or perhaps to flavor tofu.

The full name of the famed show from the sixties is “Hair: The American Tribal Love-Rock Musical”. This controversial work outraged many when it was first performed in the sixties, as it attacked many aspects of life at the time. For example, the song “Air” is a satirical look at pollution, sung by a character who comes onto the stage wearing a gas mask. The opening lines are “Welcome, sulfur dioxide. Hello carbon monoxide. The air … is everywhere”. How things have changed in fifty years said he … satirically …

The moccasin is a traditional form of footwear worn by members of many Native American tribes.

The broadcast journalist Sam Donaldson is best known as the White House correspondent for ABC for many years, as well as co-anchor of ABC’s Sunday show “This Week”. Donaldson had a famous exchange with President George W. Bush during a White House press conference in 2006. Donaldson shouted out a question about anti-semitic remarks made by actor Mel Gibson, to which President Bush joked, “Is that Sam Donaldson? Forget it … you’re a ‘has-been’! We don’t have to answer has-beens’ questions.” Donaldson gave a biting rejoinder, “Better to have been a has-been than a never-was.”

11. Grp. that might help organize an open house : PTA

Barack Obama, Sr. was first married at the age of 18 in his home country of Kenya, and had two children during that marriage. He left his wife and children back in Kenya when he enrolled in the University of Hawaii in 1959 as the school’s first African foreign student. There, Obama met Ann Dunham in a Russian language course. The two entered into a romantic relationship and Dunham became pregnant. Obama told Dunham that he was divorced from his first wife (not true), and the pair were married on Maui in 1961. Six months later, Barack Obama II was born, destined to become the 44th President of the United States. The couple divorced in 1964. After the divorce, Dunham was able to marry Lolo Soetoro, a Javanese surveyor who she met while he was studying for a masters degree at the university. Soetoro returned to Indonesia in 1966, and Dunham joined him there the following year with her 6-year-old son. Barack Obama spent four years in Indonesia before returning to Hawaii to live with his grandparents.

36. 12-minute period expanded to 30 minutes for the Super Bowl : HALFTIME

T. Boone Pickens is a wealthy businessman who made most of his fortune in the oil and gas industries. Pickens has donates a lot of his wealth, particularly to his alma mater Oklahoma State University. He has signed up to the Giving Pledge inaugurated by Bill Gates and Warren Buffett, and has committed to giving away half his wealth to charity.

48. Who left his home in Tucson, Arizona, in a Beatles tune : JOJO