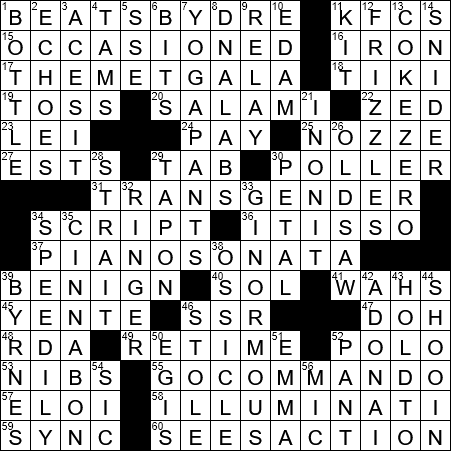 1. Brand of headphones : BEATS BY DRE

A tiki torch is a bamboo torch that’s very commonly used in Tiki culture. Tiki culture is a relatively modern invention dating from the 20th century, and is the experience created in Polynesian-style restaurants. The word “Tiki” is borrowed from Polynesia.

22. Queen Elizabeth spells her name with one : ZED

Princess Elizabeth became queen Elizabeth II in 1952 when her father, King George VI died. The Princess was on an official visit to Kenya when her husband broke the news to her, that she had become queen. When she was crowned in 1953 in Westminster Abbey, it was the first coronation to be televised. Queen Elizabeth’s reign is longest in the history of the UK.

The currency of Romania is the leu (plural “lei”), a word meaning “lion”. The leu is also the name of the currency of neighboring Moldova. Romania joined the European Union in 2007, and had planned to join the Eurozone in 2014. This implementation date was missed, and Romania continues to struggle to meet economic goals set by the EU.

In addition to 5 cello sonatas and 10 violin sonatas, Ludwig van Beethoven composed 32 piano sonatas. The most famous of his sonatas that have acquired names are probably the “Pathétique”, “Moonlight”, “Waldstein” and “Appassionata”.

Our solar system’s star is usually referred to in English as the Sun, but the Latin name “Sol” is also used at times.

45. To whom “Matchmaker, Matchmaker” is sung : YENTE

“Matchmaker, Matchmaker” is a song from the stage musical “Fiddler on the Roof”.

Back in the 1930s, a manufacturer in Cincinnati produced a doughy compound that was used to clean wallpaper. Twenty years later, school-kids started using the cleaning material as a modelling compound, so the manufacturer reworked the formula, and sold it to local schools. It was given the name Play-Doh.

52. Game in which it’s illegal to play left-handed : POLO

Chocolate is made from the seeds of the Theobroma cacao tree. The seeds are very bitter and the traditional drink made with the seed was called “xocolatl” by the Aztecs, meaning “bitter water”. That’s how our “chocolate” got its name.

“To go commando”is a slang term meaning “to wear no underwear”.

In the 1895 novel by H. G. Wells called “The Time Machine”, there are two races that the hero encounter in his travels into the future. The Eloi are the “beautiful people” who live on the planet’s surface. The Morlocks are a domineering race living underground who use the Eloi as food.

Although there were several groups known as the Illuminati, the reference is usually to the Bavarian Illuminati founded in 1776. It was a secret society, and as such was the subject of many rumors and conspiracy theories, which eventually led to the Illuminati being banned by local government and the Roman Catholic Church. Famously, Dan Brown featured the Illuminati in his best-selling 2003 novel “Angels & Demons”.

4. Hats in the Highlands : TAMS

Even though Coca-Cola Zero is in the category of “diet soda”, the marketing folks at Coca-Cola don’t like its association with the word “diet”. The target market for the beverage is young, adult males, so it is described as “calorie-free” rather than “diet”, the assumption being that males associate “diet” with women. Not in this house …

Duke Snider spent most of his MLB career with the Brooklyn and LA Dodgers. After retiring from baseball, Snider did quite a bit of acting. He often played himself or some baseball player, but also appeared in shows like “The Rifleman”.

32. Someone who’s really too good to be competing : RINGER

A ringer was originally a fast horse that was substituted surreptitiously into a race for a slower one. The term was derived from the verb “to ring in”, meaning “to substitute”. We use the phrase “dead ringer” to describe an exact duplicate.

“Ginormous” is a melding of the words “gigantic” and “enormous”, and surprisingly to me, one that dates back to about 1948. I thought that the term was far more contemporary …

A stole is a lady’s clothing accessory, a narrow shawl. It can be made of quite light decorative material, or it can be heavier especially if made of fur.

Someone is said to be under the aegis (also “egis”) of someone else (for example) if that other person provides protection, or perhaps sponsorship. The word “aegis” comes from the Greek word for a goat (“aigis”), the idea being that the goatskin shield or breastplate worn by Zeus or Athena, gave some measure of protection.