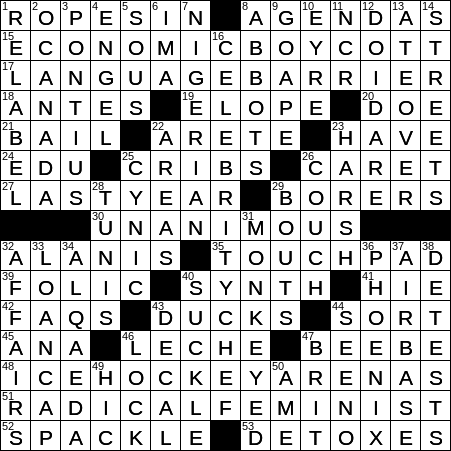 “Boycott” is another word given to the world by the Irish! Englishman Captain Charles Boycott found himself on the wrong side of a local community in County Mayo in the west of Ireland, and in a concerted campaign he was refused service by all around him. His name lives on …

17. Problem in the Tower of Babel story : LANGUAGE BARRIER

An arete is ridge of rock defining the border between two parallel valleys that have been formed by glaciation. If this ridge is rounded, it is called a “col”. However if it is “sharpened”, with rock falling way due to successive freezing and thawing, then it is called an “arete”. “Arête“ is the French word for “fish bone”.

A crib is a plagiarism, most commonly the copying of an answer in an examination.

Folic acid is also known as vitamin B9. Folic acid occurs in the human body as folate, a substance essential in the synthesis and repair of DNA.

“To hie” is to move quickly, to bolt.

42. They’re answered once and for all : FAQS

“Dulce de leche” is Spanish for “candy of milk”, and is a confection made by slowly heating milk and sugar until it develops a pleasing flavor and color.

E.M. Forster’s novel “A Room with a View” was first published in 1908. The novel’s title refers to the view that was promised two Englishwomen who check into a hotel in Florence. The pair expected a view of the River Arno, and instead get a view of the hotel’s courtyard. A fellow guest offers to swap rooms, and from there the plot thickens! There was a fantastic screen adaptation released in 1985 directed by James Ivory and produced by Ismail Merchant. There is a great cast, including Helena Bonham Carter, Maggie Smith, Judi Dench and Daniel Day-Lewis.

Spackling paste is a hole-filling product used to repair surface defects in wood, drywall and plaster. “Spackle” is actually a brand name, but we tend to use it as a generic term.

3. First name in the Gospels : PONTIUS

Pontius Pilate was the judge at the trial of Jesus Christ and the man who authorized his crucifixion. Over the years, many scholars have suggested that Pilate was a mythical character. However in 1961 a block of limestone was found in the modern-day city of Caesarea in Israel, and in the block was an inscription that included the name of Pontius Pilate, citing him as Prefect of Judea.

Richard Engel is a television journalist, and the chief foreign correspondent for NBC News.

Nigeria is in West Africa, and it takes its name from the Niger River which flows through the country. Nigeria is the most populous country on the continent, with over 180 million inhabitants. It is also the most populous member of the Organization of the Petroleum Exporting Countries (OPEC).

Lake Eyre is located in the deserts of central Australia. At 49 feet below sea level, Lake Eyre is the lowest point in the whole country.

NCR is an American company that has been in business since 1884, and was originally called the National Cash Register Company. The company has done well in a market where new technologies seem to be constantly disrupting the status quo.

25. One “whose faulty vision sees things as they are, not as they ought to be,” per Ambrose Bierce : CYNIC

The term “Arab Spring” has been applied to the wave of protests, riots and civil wars that impacted the Arab world from 2010 to 2012. The uprisings were sparked by the Tunisian Revolution at the end of 2010 that led to the ouster of the longtime president and the institution of democratic elections. The period of instability that followed in some Arab League countries has been dubbed the “Arab Winter”

A phoenix is a fabulous bird of Greek mythology, which can also be found in the mythologies of Persia, Egypt and China. The phoenix is a fire spirit, which lives from 500 to 1000 years. At the end of its lifespan is builds a nest for itself (a pyre) and self-ignites, burning itself and the nest, creating a pile of ashes. A young phoenix arises from the ashes and the cycle starts all over again.

37. Starting site for sorties : AIR BASE

A sortie is an attack by an armed unit, usually a breakout by forces that are besieged, The term “sortie” comes directly from French and means “a going out”. “Sortie” is also used for a mission by a combat aircraft.

Mia Farrow is an energetic, award-winning actress who really hasn’t looked back in her career since her first leading role, in “Rosemary’s Baby” back in 1968. Her on-screen celebrity is matched by the interest created by her personal life. Her first husband was Frank Sinatra, a wedding in 1966 that received a lot of attention partly due to the couple’s age difference (she was 21, he was 50). Her second husband was almost as famous, the magnificent musician André Previn. Farrow then moved in with Woody Allen, a relationship that famously fell apart when Farrow discovered that Allen was having a sexual relationship with Soon-Yi, one of her adopted daughters from the marriage with André Previn.

The African Methodist Episcopal Zion (AME Zion) Church was formed in New York City. The church was established by African American Christians who faced discrimination when attending other churches. Initially, the African-American congregations were led by Caucasian Methodist ministers, with the first African American being ordained in 1820.