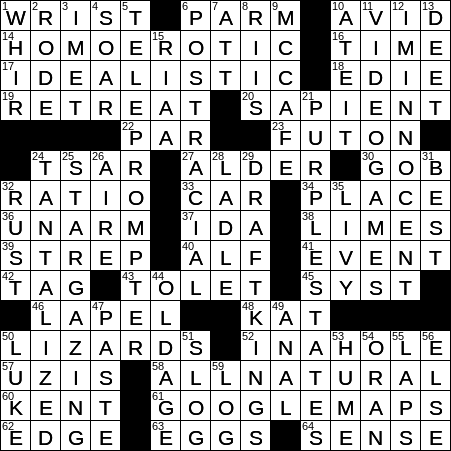 14. Like much of Shakespeare’s and Sappho’s love poetry : HOMOEROTIC

To be sapient is to have great wisdom and discernment. “Sapient” comes from the Latin “sapere” meaning “to perceive, to be wise”.

There appears to be heated debate by those in the know, about whether or not the type of wood used in the construction of electric guitars makes a difference to the sound quality. However, amongst those that value of wood choice, alder is the clear favorite.

33. What Christine is in the book “Christine” : CAR

“Christine” is a 1983 novel from the pen of horror maestro Stephen King. The title character is a 1958 Plymouth Fury automobile that is apparently possessed by supernatural forces. Not my cup of tea …

Streptococcus bacteria multiply and divide along a single axis so that they form linked chains. That behavior gives the genus of bacteria its name, as “streptos” is Greek for “easily twisted, like a chain”. I had to battle with streptococcal pharyngitis (strep throat) twice in the past few years and it was not at all pleasant, I must say. Another species of streptococcus is responsible for that terrible “flesh-eating” infection that makes the news from time to time.

Originally, the verb “to heckle” meant to question severely, and for many years was associated with the public questioning of parliamentary candidates in Scotland. In more recent times, the meaning has evolved into questioning that is less polite and that is directed at standup comics.

“Suits” is an entertaining, albeit formulaic, legal drama that is set in New York City. One of the main characters in the show Mike Ross, a brilliant law school dropout who poses as a law associate. Mike Ross’ love interest is paralegal Rachel Zane. Zane is played by actress Meghan Markle, who became engaged to the UK’s Prince Harry at the end of 2017.

21. They can swing left or right : PURPLE STATES

A consommé is a clear soup made from a clarified stock. Egg whites are used in the clarification process, to remove fat and any sediment.

35. Writer on the history of Rome : LIVY

Titus Livius (aka “Livy”) was a Roman historian who lived from 59 BC to AD 17. Livy wrote the definitive history of Rome at that time.

Something or someone described as senescent is aging, growing old. The term comes from the Latin “senex” meaning “old”.

The Gospel According to Luke is the longest of the four Gospels in the Bible. Some well-known stories are unique to Luke, and do not appear in the Gospels of Matthew, Mark nor John. A couple of examples would be “The Prodigal Son” and “The Good Samaritan”. It is believed that the author of the Gospel of Luke was the same person who wrote “Acts of the Apostles”.

The TV journalist Brit Hume’s full name is Alexander Britton Hume. He makes a lot of appearances on the Fox News Channel.

54. Algerian city where Camus’s “The Plague” is set : ORAN

Oran lies on the Algerian coast, and is famous for being the port where the French Navy was largely destroyed by the British during WWII in order to avoid the French vessels falling into the hands of Nazi Germany after France surrendered. This decisive and unexpected unilateral action by the British sent a very strong message around the world that Britain was willing to fight alone against the axis powers if necessary.

“The Plague” is a novel by Albert Camus, first published in 1947. It is set in the Algerian port of Oran during a terrible plague.