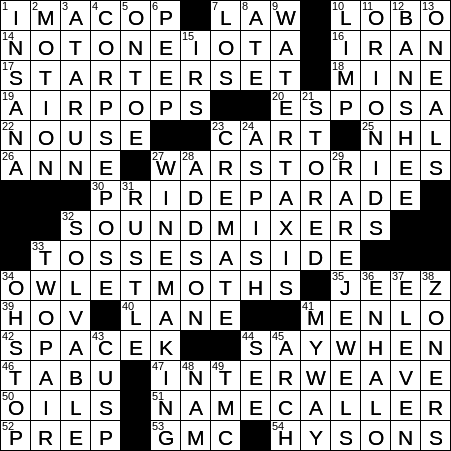 Owlet moths are a large family of moths known more formally the Noctuidae. Most owlet moths fly at night and are attracted to light. Many species are preyed upon by bats. Some of these species have a defense mechanism, organs in the ears that pick up the sonar signals emitted by bats and cause the moth wings to spasm. The erratic flying helps the moth evade its hunter.

In some parts of the country, one sees high-occupancy vehicle lanes (HOV lanes). Out here in California we refer to them as carpool lanes.

The actress Sissy Spacek got her big break in movies when she played the title role in the 1976 horror movie “Carrie”, which is based on the Stephen King novel. Her most acclaimed role is the lead in the 1980 biopic about Loretta Lynn called “Coal MIner’s Daughter”, for which she won an Oscar. Spacek’s first cousin is the actor Rip Torn.

Hyson is a Chinese green tea that is also known as Lucky Dragon Tea.

Ron Insana is a TV commentator, reporter and host in the world of financial news programs. He made a name for himself during the days of the Bush administration as he pulled off two exclusive interviews with President George W. Bush in which they discussed the economy.

A banshee is a female spirit in Irish mythology, from the Irish “bean sí” meaning “woman of the fairy mounds”. The banshee is supposedly heard wailing in the night, especially when someone is about to die.

The Federal Insurance Contributions Act tax (FICA) was introduced in the 1930s as part of President Roosevelt’s New Deal. FICA payments are made by both employees and employers in order to fund Social Security and Medicare.

The song “My Way” has lyrics that were written by Paul Anka in 1969, but the tune itself was composed two years earlier by Claude François and Jacques Revaux. The song had been released with completely different lyrics in France as “Comme d’habitude” (“As Usual”). When Anka heard the song on television in Paris he sought out and obtained the rights to use it himself, for free. Supposedly, “Comme d’habitude” has been recorded in more languages, by more artists, than any other song in the contemporary repertoire.

And now, the end is near
And so I face the final curtain
My friend, I’ll say it clear
I’ll state my case, of which I’m certain
I’ve lived a life that’s full
I traveled each and every highway
And more, much more than this, I did it my way

By some definitions, the official involvement of Americans in the Vietnam War started in 1955. At that time, President Eisenhower deployed a Military Assistance Advisory Group to assist in the training of the South Vietnamese Army. American involvement in the conflict officially ended in 1973 with the signing of an agreement that came out of the Paris Peace Accords.

The Movie Channel is owned by Showtime, which in turn is subsidiary of CBS. The channel’s name is often abbreviated to “TMC”, although this is informal usage.

The Starz premium cable channel is owned by the same company that owns the Encore cable channel. Starz was launched in 1994 and mainly shows movies.