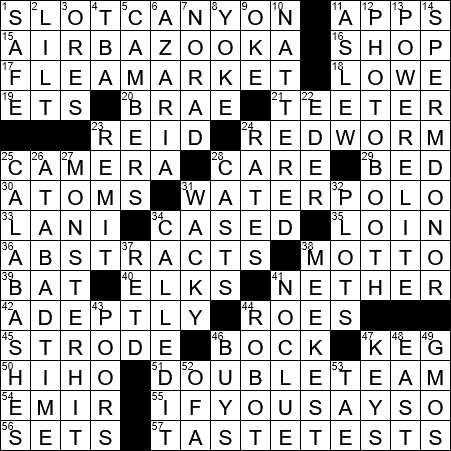 Pandora is a clever music-streaming site that runs what’s called the Music Genome Project. The idea behind the project is that particular pieces of music can be classified by specific characteristics (genes). The assumption is that given a person’s liking for the genome of a particular song, then a recommendation of another song with a similar genome will also be enjoyed by that person. I’ve used Pandora quite a lot, and it seems to work!

The dice game called Yahtzee was introduced in 1956 and is a variant of earlier dice games, especially the game “Yacht” (which even has a similar name). Yahtzee is required playing in our house at holidays. The game involves the rolling of five dice, with the intent of getting certain combinations. A lot of those combinations resemble poker hands, such as “three of a kind”, “four of a kind” and “full house”.

Our modern bingo is a derivative of an Italian lottery game called “Il Giuoco del Lotto d’Italia” that became popular in the 16th-century.

Democrat Harry Reid was the Senate Majority leader from 2007 until 2015. Reid had a big day in the Senate from a Democratic perspective with the successful passage of the so-called ObamaCare Bill. Paradoxically, Harry Reid’s wife was in hospital at the time, having broken her back in a car accident. Reid took over as Senate Majority leader from Republican Bill Frist who retired from politics in 2007. Reid was replaced in 2015 by Republican Mitch McConnell.

Bill Frist was Senate Majority Leader for the Republican Party from 2003 to 2007. Prior to becoming a politician, Frist was a heart and lung transplant surgeon. He has also been a pilot since he was 16-years-old, and has run seven marathons.

The sport of water polo is thought to have originated in Scotland, where it was a feature of fairs and festivals. Men’s water polo was introduced into the Olympic Games in 1900, making it one of the oldest team sports in the games.

34. Checked out before going in? : CASED

The term “case the joint” is American slang dating back at least to 1915, meaning to examine a location with the intent of robbing it. The origins of the phrase are apparently unknown.

A bock is a strong lager from Germany that was first brewed in the town of Einbeck. The famous brewers of Munich adopted the style of beer, calling it Einbeck after the town of its origin. However, with the Bavarian accent “Einbeck” came out as “ein Bock”, the German for “a billy goat”. The name “bock” stuck, and so you’ll very often see a billy goat on the labels of bock beers.

5. Slight upward curves, as in roads or beams : CAMBERS

“To camber” is “to arch slightly, curve upwards in the middle”. “Camber” was originally a nautical term, and ultimately derives from the Latin “camurum” meaning “bent, arched”.

7. Org. based near Colorado Springs : NORAD

The North American Defense Command (NORAD) isn’t just a US operation but is a cooperative arrangement between Canada and the United States. The two countries entered into an agreement to establish NORAD in 1958, mainly due to the concern that there would be little or no warning of a missile attack from the Soviet Union that came over the North Pole. NORAD also tracks Santa Claus coming from the North Pole every Christmas, and these days publishes Santa’s location on Christmas Eve on its website. The tracking of Santa started into 1955 when a local Sears store placed an advertisement in a Colorado Springs newspaper with a phone number that could be used to call Santa Claus. The newspaper accidentally printed the number for the Continental Air Defense Command (a precursor to NORAD). The officer on duty instructed his staff to give all children who called a “current location” for Santa. Today, NORAD gets about 120,000 phone queries about Santa’s location every year, and website gets about 20 million visitors.

44. One who acts without thinking : ROBOT