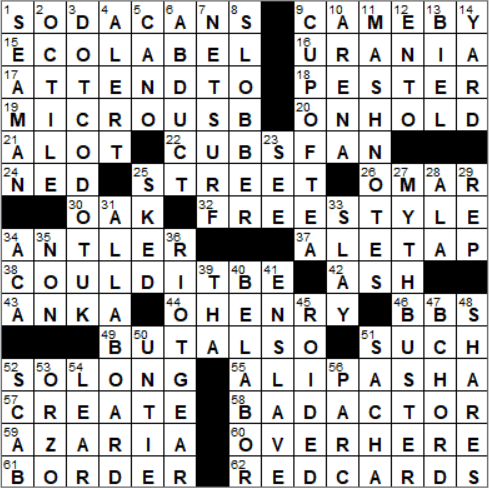 16. Muse symbolized by a globe and compass : URANIA

The Chicago Cubs baseball team was supposedly subject to the “curse of the Billy Goat” from 1945 until 2016. Billy Sianis, the owner of a Billy Goat Tavern in Chicago, took his pet goat with him to a World Series game against the Detroit Tigers at Wrigley Field. Fans sitting nearby didn’t like the smell of the goat, and so the owner was asked to leave. As he left, Sianis yelled out, “Them Cubs, they ain’t gonna win no more.” And that is how a curse is born …

Famously, the layout of the streets in Washington was designed by French-born American architect Pierre Charles L’Enfant. The L’Enfant Plan called for a grid of east-west and north-south streets. This grid was crisscrossed with diagonal avenues. The avenues and streets met at circles and rectangular plazas. The east-west streets are generally named for letters, while the north-south streets are numbered. Later, many of the diagonal avenues were named for states of the union.

Neil Sedaka has been performing and composing for well over 50 years. His list of hits includes classics such as “Stupid Cupid”, “Oh! Carol”, “Happy Birthday Sweet Sixteen” and “Breaking Up Is Hard to Do”.

55. Ottoman ruler referenced in “The Count of Monte Cristo” : ALIPASHA

“The Count of Monte Cristo” is an 1844 novel by the French author Alexandre Dumas. Dumas’ other famous title is “The Three Musketeers”.

Robinson Canó is a second baseman playing for the Seattle Mariners. Robinson’s father José Canó is a former pitcher who played briefly for the Houston Astros. José named his son for the great Jackie Robinson.

To shanghai someone is to compel that person to do something against their will. “Shanghai” is actually an American term as it was first used to describe the practice of kidnapping men to work as crew on merchant ships, a practice engaged in initially on the West Coast of the US. The word “shanghai” was chosen as Shanghai was a common destination for the ships.

In essence, the World Wide Web is a vast collection of documents that is accessible using the Internet, with each document containing hyperlinks which point to other documents in the collection. So the “Web” is different from the Internet, although the terms are often used interchangeably. The Web is the collection of documents, and the Internet is global network of computers on which the documents reside. The Web was effectively the invention of British computer scientist Tim Berners-Lee. The key to Berner-Lee’s invention was bringing together two technologies that already existed: hypertext and the Internet. I, for one, am very grateful …

A “mash note” is a love letter, especially one expressing intense infatuation. Back in the late 1800s, “mash” was a slang term for a major crush.

“MythBusters” is an entertaining TV show in which hosts Jamie Hyneman and Adam Savage test the validity of myths and famous movie scenes. Prior to the launch of “Mythbusters”, Hyneman and Savage had both developed careers in the world of special effects.

Minestrone is a hearty Italian soup with varying ingredients, but usually including lots of vegetables in a vegetable broth with added pasta or rice. The term “minestrone” comes from the Italian “minestrare” meaning “to serve”.

54. Who said “How sharper than a serpent’s tooth it is to have a thankless child!” : LEAR