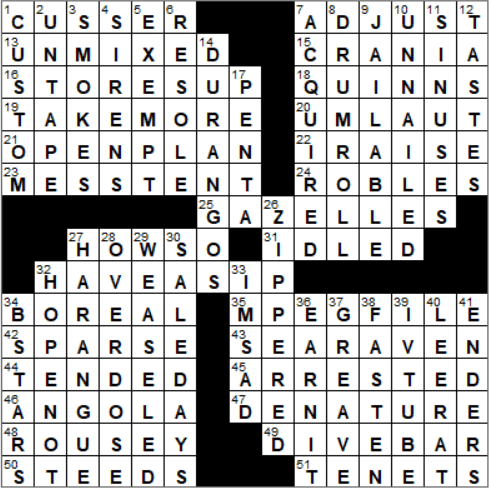 15. Images on a timeline of human evolution, maybe : CRANIA

Aidan Quinn is an Irish-American actor. Quinn was born in Chicago but spent some years growing up in Ireland. Mainly known as a movie actor, Quinn is currently playing the role of Captain Tommy Gregson on the excellent TV series “Elementary” that is centered on a modern-day Sherlock Holmes.

Anthony Quinn was a Mexican-born American actor who is perhaps best known for playing the title role in the 1964 film “Zorba the Greek”. Off the screen, Quinn was an accomplished artist, with his works being exhibited both domestically and internationally.

Paso Robles is a lovely little city in San Luis Obispo County, California. Paso Robles is home to many, many wineries. The name Paso Robles translates from Spanish as “The Pass of the Oaks”.

Ronda Rousey is a mixed martial artist, and the first US woman to win an Olympic medal in judo. Rousey is a popular person online, with hers being the third-most searched name on Google in 2015 (after Lamar Odom and Caitlyn Jenner).

The regiment known formally as the 1st US Volunteer Cavalry is more familiarly known as the Rough Riders. When Theodore Roosevelt was a Lieutenant-Colonel in the unit, it became known as “Roosevelt’s Rough Riders”.

2. Begin to remove, as a diaper : UNTAPE

To weasel out of something is to back away from a prior commitment. The association of weasels with the concept of not being trusted might have arisen from the behavior in which a weasel sucks out the contents of an egg while leaving the shell virtually intact.

Stars are usually classified based on the color of the light that they emit. These classifications are, from hottest to coolest, O, B, A, F, G, K and M. One way to remember the order of these letters is to use the mnemonic “Oh, be a fine girl, kiss me”. The colors of these stars range from blue (class O) to red (class M). Our sun is class G, a yellow star. I think we all know that …

Spica is the brightest star in the constellation of Virgo, and the 15th brightest star in the night sky. Spica is actually a “binary star”, meaning that it is composed of two individual stars so close together that they cannot be resolved through a telescope. The two stars orbit each other every four days.

Orson Scott Card is a science fiction author (mainly). Card’s most famous work is his novel “Ender’s Game” first published in 1985. “Ender’s Game” was adapted into a movie and released in 2013, with a cast that includes Harrison Ford.