Constructed by: Neville Fogarty & Doug Peterson
Edited by: Will Shortz 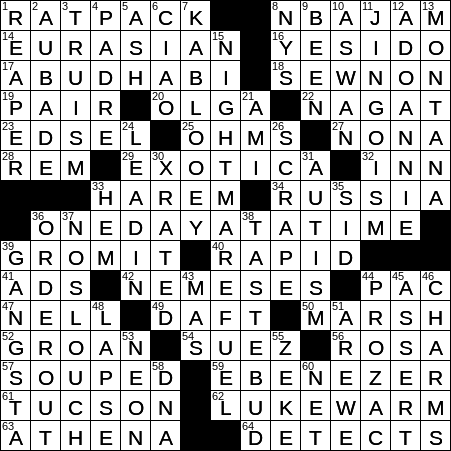 Olga Kurylenko is a Ukrainian actress and model. Kurylenko played the Bond girl Camille Montes in the James Bond movie “Quantum of Solace”.

23. Car once promoted with the line “The thrill starts with the grille” : EDSEL

The word “exotic” means “belonging to another country”, and is derived from the Greek “exo-” meaning “outside”. Exotica are things that are excitingly strange, often from foreign parts.

Rails are birds of the family Rallidae (hence their name). Outside of America, the name “rail” tends to be reserved for long-billed species and the the term “crake” is used for short-billed species.

Jacob Marley is a character appearing in the wonderful novella by Charles Dickens called “A Christmas Carol”. Marley is the deceased business partner of Ebenezer Scrooge who appears to him as a ghost.

Tucson is the second largest city in Arizona (after Phoenix). The founding father of the city was Hugh O’Conor, yet another Irishman, but one who was raised in Spain. O’Conor was a mercenary working for Spain when he authorized the construction of a military fort called Presidio San Augustín del Tucsón in 1775, which eventually grew into the city that we know today. The Spanish name “Tucsón” comes from the local name “Cuk Ṣon”, which translates as “(at the) base of the black (hill)”.

The San Diego Padres baseball team was founded in 1969, and immediately joined the ranks of Major League Baseball as an expansion team. The Padres took their name from a Minor League team that had been in the the city since 1936. The name is Spanish for “fathers” and is a reference to the Franciscan Friars from Spain who founded San Diego in 1769.

Mary Kay Ash founded her skincare and cosmetics company, somewhat ominously on Friday, 13th September 1963. In 1968, Mary Kay Ash bought herself a pink Cadillac, specially painted to match the color of one of her compacts. The car became so famous that she gave away five of them to her top saleswoman, a tradition that endures to this day.

Buffalo is the second most-populous city in the state of New York. The city takes its name from Buffalo Creek that runs through the metropolis (although the waterway is called Buffalo River within the city). The source of the name Buffalo Creek is the subject of much speculation, but one thing is clear, there were never any bison in the area.

11. Flag-waving and such : JINGOISM

Jingoism is an extreme form of nationalism, exhibited by a country that uses threats or force internationally in order to advance its national interests. The term originated in England and comes from the expression “by Jingo”, a euphemism for “by Jesus” that was used as an oath.