Constructed by: Jim Quinlan
Edited by: Will Shortz 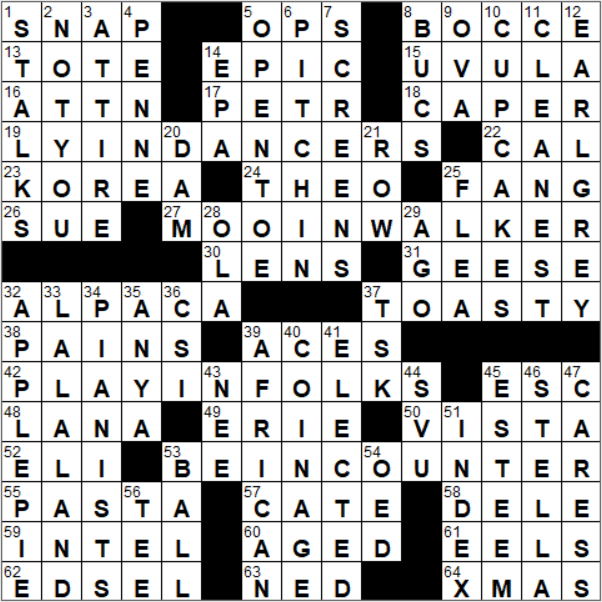 Today’s Theme (according to Bill): “N” Sound to “In” Sound

Themed answers are common phrases in which an “n” sound at the end of the first word has been changed to an “in” sound. This gives us words ending with “in’” (“ing” shortened).

27. Cow as it strolls around the pasture? : MOOIN’ WALKER (from “moonwalker”)

Michael Jackson introduced his one-glove look that same day that he debuted his little dance move known as the Moonwalk. It all took place on an NBC TV special in 1983 called “Motown 25”.

The Erie Railroad operated from 1832 to 1960, and connected New York City with Lake Erie. The Erie Railroad was largely built as compensation for the towns in the Southern Tier of New York who lost business when the Erie Canal was completed in 1825.

Ronzoni is a brand owned by New World Pasta, which is the largest supplier of pasta to the retail North American market.

Some Dutch people can get a little annoyed if one refers to their country as “Holland”, as the correct name is “the Netherlands”. North and South Holland are two of the country’s twelve provinces. The use of “Holland” instead of “the Netherlands” is analogous to the former Soviet Union being referred to as “Russia” and the United Kingdom being called “England”. That said, sometimes even the Dutch people themselves refer to the country as Holland, especially at a soccer match!

Birkenstock is a shoe manufacturer based in Germany.

The Tampa Bay Buccaneers joined the NFL in 1976 along with the Seattle Seahawks as expansion teams. The Bucs had a tough start in the NFL, losing their first 26 games. Things went better in the early eighties, but then the team went through 14 consecutive losing seasons. Their luck changed again though, and they won the Super Bowl at the end of the 2002 season.

The Clean Air Act of 1963 is administered by the Environmental Protection Agency (EPA).

The folk tale about “Cinderella” was first published by French author Charles Perrault in 1697, although it was later included by the Brothers Grimm in their famous 1812 collection. The storyline of the tale may date back as far as the days of Ancient Greece. A common alternative title to the story is “The Little Glass Slipper”.