Constructed by: Natan Last, Andy Kravis and the J.A.S.A. Crossword Class
Edited by: Will Shortz 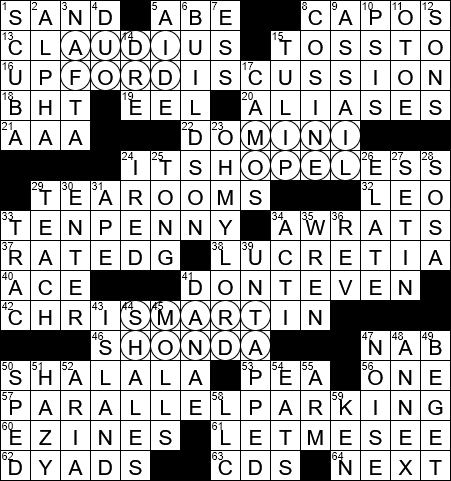 Today’s grid includes three pairs of circled letters. Those circled letters spell out the names of various cars, and each car is PARKED PARALLEL to another in the grid:

Shinzo Abe first became Prime Minister of Japan in 2006, at which time he was the youngest person to hold the post since WWII and was the first PM born after the war. Abe was in office for less than a year, but was voted in again in 2012. Abe is usually characterized as a right-wing nationalist.

Butylated hydroxytoluene (BHT) is a food additive that is allowed in our food. BHT is an antioxidant.

When the great movie “Butch Cassidy and the Sundance Kid” was in development, Paul Newman was always the first choice to play one of the leads, although the initial casting had him in the role of Sundance. Steve McQueen actually accepted the co-starring role, but left over a dispute about the billing (the film was entitled “The Sundance Kid and Butch Cassidy” at that point). The role of Sundance was then offered to Jack Lemmon, but he turned it down. Warren Beatty and Marlon Brando were considered next, before opting for the relatively unknown Robert Redford. What a great choice …

Melissa Leo is an actress from Manhattan, New York. Leo is currently in the main cast of the HBO drama series “Treme”.

Lucretia Coffin Mott (what a name!) was an American Quaker, and an advocate for women’s rights. Mott has been called the first American “feminist”. Her first job was teaching in the Quaker school in which she was educated. There she learned that her salary was to be one third of that paid to the males with the same job (she married one of the male teachers!). That injustice initiated her interest in women’s rights.

Coldplay is a rock band that was formed in London in 1996 by Chris Martin and Jonny Buckland. Chris Martin was married to the American actress Gwyneth Paltrow for twelve years.

“The Princess and the Pea” is a fairy tale from the pen of Danish author Hans Christian Andersen. The essence of the story is that a prince’s mother tests the royal blood of an apparent princess by placing a pea under a pile of mattresses on which the young girl sleeps. The girl complains of a restless night, demonstrating a physical sensitivity that can only be attributed to a princess. And they all live happily ever after …

The compact disc was developed jointly by Philips and Sony as a medium for storing and playing sound recordings. When the first commercial CD was introduced back in 1982, a CD’s storage capacity was far greater than the amount of data that could be stored on the hard drive of personal computers available at that time.

3. Pact inveighed against by Trump : NAFTA

The North American Free Trade Agreement (NAFTA) is between Canada, Mexico and the United States. When NAFTA came into force in 1994, it set up the largest free trade zone in the world.

The start of the word “something” is a letter S (ess).

Psi is the 23rd letter in the Greek alphabet, and the one that looks a bit like a trident or a pitchfork.

We usually associate the cultivation of tulips with the Netherlands, but they were first grown commercially in the Ottoman Empire. The name “tulip” ultimately derives from the Ottoman Turkish word “tulbend” which means “muslin, gauze”.

A “tong”, in the sense of being an organization within the Chinese immigrant community, is a North American phenomenon. The original intent of the tongs was to provide benevolent support and protection for members, but even since the early 1800s some tongs have been associated with crime. The word “tong” means “hall” or “gathering place”.

Gillette introduced the Trac II in 1971. The Trac II was the world’s first twin-blade razor.

In Greek mythology, Danaë was the mortal mother of the heroic slayer of monsters Perseus, with the father being Zeus. Danaë herself was the daughter of King Acrisius of Argos and his wife Queen Eurydice.

The slang term “moll” is a used for the female companion of a gangster. “Moll” is short for “Molly”, which is a nickname for “Mary”. In 17th-century England a moll was a prostitute.