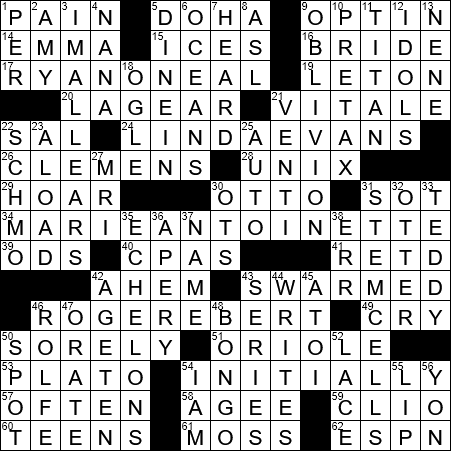 Themed answers are the names of famous people. Themed clues start with a word that we have to break up into component parts, the first of which are the initials of the person in the answer:

Doha is the capital city of the state of Qatar located on the Persian Gulf. The name “Doha” translates from Arabic as “the big tree”.

Jane Austen’s novel “Emma” is the tale of Emma Woodhouse and the wonderful George Knightley. At the end of the story, Emma marries Knightley and her young friend Harriet marries Robert Martin, who had been trying to get Harriet’s attention practically from page one of the novel.

Actor Ryan O’Neal got his big break in the sixties on television. He appeared in the prime-time soap opera “Peyton Place”, opposite fellow newcomer Mia Farrow. Then in 1970 he landed a starring role in the hit movie “Love Story”, which established him in Hollywood. O’Neal was an amateur boxer before he turned to acting, and established a respectable record Golden Gloves competitions. These days, O’Neal has a recurring role on the TV show “Bones”, playing the title character’s father.

LA Gear is an athletic shoe manufacturer based in Los Angeles.

The basketball sportscaster Dick Vitale is also known as “Dickie V”. Vitale is famous for coining some colorful and descriptive terms, such as “diaper dandy” for an outstanding freshman player.

Jack Kerouac’s 1957 novel “On the Road” is largely autobiographical, telling the story of Sal Paradise (Jack K.) and the road trips that he and his friends took across the country in the fifties.

Linda Evans is an actress probably best known for playing Audra Barkley on TV’s “The Big Valley” in the sixties, and Krystle Carrington on the prime-time soap “Dynasty in the eighties. Evans was married for six years to film producer John Derek, and also had a nine-year relationship with new-age musician Yanni.

Roger Clemens is a retired baseball pitcher who racked up the third-highest number of career strikeouts (after Nolan Ryan and Randy Johnson). Clemens earned the nickname “The Rocket” due to a hard-throwing, intimidating pitching style.

The Baltimore oriole is a small bird with a largely yellow body. The male’s coloring of black and yellow resembles the colors of the coat-of-arms of Lord Baltimore, the first Governor of the Province of Maryland, and so the bird was given the name “Baltimore” oriole. It is the state bird of Maryland, and lends its name to the Baltimore Orioles baseball team.

58. James with a posthumous Pulitzer : AGEE

FiveThirtyEight is a website that publishes compiled polling date during election cycles. The site takes its name from from the total number of electors in the US electoral college. FiveThirtyEight was established in 2008, by Nate Silver.

12. Subjects of the Second Commandment : IDOLS

In the Christian tradition, the second commandment prohibits the worship of “any graven image”. Usually this means that graven images can be created, but not worshipped.

The bird called a “nene” is a native of Hawaii, and is also known as the Hawaiian goose. The name “nene” is imitative of its call. When Captain Cook landed on the islands in 1778, there were 25,000 nene living there. By 1950, the number was reduced by hunting to just 30 birds. Conservation efforts in recent years have been somewhat successful. The nene was named State Bird of Hawaii in 1957.

The stuffed toy known as a teddy bear was introduced in the early 1900s and was name after President Theodore “Teddy” Roosevelt. The toy was inspired by a political cartoon that was drawn in 1902 showing President Roosevelt on a bear hunt and refusing to kill a black bear cub.

Jamestown in the Colony of Virginia was the first English settlement in what was to become the United States. The settlement was established as James Fort in 1607, and served as capital of the colony from 1616 to 1699. Jamestown started to decline after a fire in the statehouse in 1698 that caused the capital to relocate to Williamsburg. The town was eventually abandoned and today exists as a heritage site.

Bongo drums are Cuban percussion instruments consisting of a pair of drums, one larger than the other, The smaller drum is called the “hembra” (female) and the larger the “macho” (male).

To lace into is attack violently, and is similar to the verb “lay into”.

54. Cartesian conclusion : I AM

The great French philosopher Rene Descartes made the famous statement in Latin, “Cogito ergo sum”. This translates into French as “Je pense, donc je suis” and into English as “I think, therefore I am”.

Anything pertaining to the philosophy of the great Rene Descartes can described by the adjective “Cartesian”.