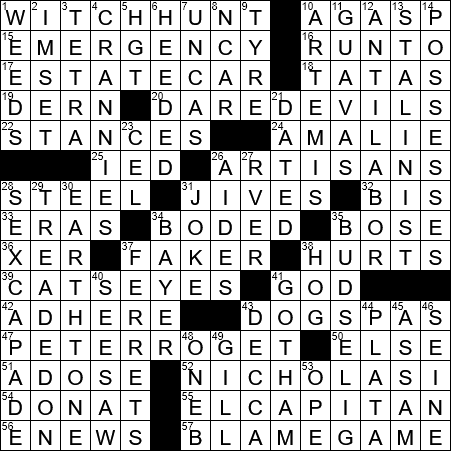 17. What the British call a station wagon : ESTATE CAR

The style of automobile that we call “station wagon” here in North America, is known as “estate car” in the British Isles. Both names are really references to the vehicle’s utility in hauling baggage in the extra space provided in the rear. A station wagon could haul bags to the station, and an estate car could haul bags to one’s country estate!

The actress Laura Dern is the daughter of the actors Bruce Dern and Diane Ladd. Among her many notable roles, Laura played the Florida Secretary of State Katherine Harris in the 2008 movie “Recount”, and Dr. Ellie Sattler in the 1993 blockbuster “Jurassic Park”.

Although “hotdogging” is a term now used across all sports, it was primarily associated with skiing and described the performance of showy and risky stunts on the slopes.

Having lived much of my life in the border areas between southern and Northern Ireland, I am sadly all too familiar with the devastating effects of improvised explosive devices (IEDs). One has to admire the bravery of soldiers who spend their careers defusing (or attempting to defuse) such devices in order to save the lives and property of others.

“To jive” is a slang verb meaning “to tease”.

A charlatan is someone who makes false claims of skill or knowledge. “Charlatan” is a word we imported from French, although the original derivation is the Italian “ciarlatano”, the term for “a quack”.

47. Author much used by other authors : PETER ROGET

The fabulous 1939 movie “Goodbye, Mr. Chips” is an adaptation of a novel of the same name by James Hilton. Heading the cast are British actors Robert Donat and Greer Garson. “Goodbye, Mr. Chips” was remade as musical in 1969 starring Peter O’Toole and Petula Clark. I haven’t seen the remake, and frankly am a little scared to do so …

El Capitan is a stunning vertical rock formation in Yosemite National Park in California. The top of El Capitan has been used as the take-off point for many BASE jumps, parachute jumps made by diving off the top of the rock face. The National Park Service put a stop to the practise in 1999. Soon after, a BASE jumper made an illegal jump to protest the ban. She died …

7. Last of the Mohicans : UNCAS

“The Last of the Mohicans” is an 1826 novel by James Fenimore Cooper. It is the second in a series of five novels that comprise the “Leatherstocking Tales”. All five titles are:

Artemis was an ancient Greek goddess, the equivalent of the Roman goddess Diana. Artemis was a daughter of Zeus and Leto, and the twin sister of Apollo. Among other things, she was the goddess of the hunt, and so often is depicted carrying a bow and arrows.

Joseph Stalin was Soviet Premier from 1941 to 1953. Stalin’s real name was Ioseb Besarionis dze Jughashvili. Not long after the Bolshevik Revolution of 1903 he adopted the name “Stalin”, which is the Russian word for “steel”.

A sexual escapade; a “sexcapade”.

35. Commissioner inducted into the Baseball Hall of Fame in 2017 : BUD SELIG

Decca Records started out in 1929 as a British record label. The US branch of Decca was opened up in 1934, but the UK and US entities went their separate ways starting in WWII. Famously, Decca turned down a chance to record the Beatles in 1962 taking the position “Guitar groups are on the way out”. That said, Decca did sign the Rolling Stones.

“Oro y Plata” means “gold and silver”, and is the state motto of Montana. The motto was written in Spanish, solely because “it had a nice ring to it”.

Raoul Dufy was a French painter active in the first half of the 20th century. He was classed as a “fauve”, one of the group of artists known as the “wild beasts”, who emphasized strong color over realism in their works.