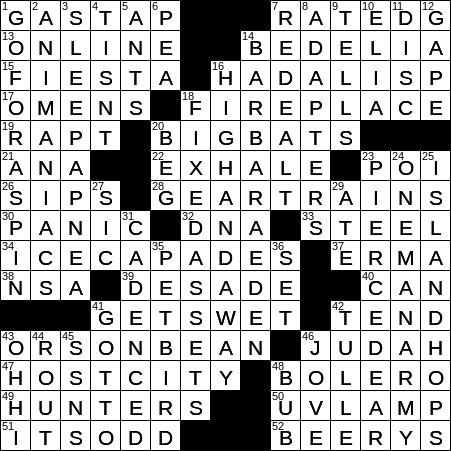 15. Occasion for a piñata : FIESTA

The Ice Capades was a travelling show that featured ice skating performances in a theatrical setting. Stars of the shows were usually retired Olympic competitors. The Ice Capades were founded in Hershey, Pennsylvania in 1940, but went out of business in 1995.

“Aunt Erma’s Cope Book” was written by Erma Bombeck and published in 1979. Erma Bombeck wrote for newspapers for about 35 years, producing more than 4,000 witty and humorous columns describing her home life in suburbia.

39. He wrote “It is always by way of pain one arrives at pleasure” : DE SADE

Orson Bean is an actor who is perhaps best known for his appearances on television game shows in the sixties, seventies and eighties. His most famous game show role was panelist on “To Tell the Truth”. Interestingly, Bean (real name Dallas Burrows) is a first cousin, twice removed, of President Calvin Coolidge.

“Being John Malkovich” is a 1999 fantasy comedy starring John Cusack and Cameron Diaz, and of course John Malkovich playing himself. The crazy storyline features a puppeteer (played by Cusack) who discovers a portal into Malkovich’s mind.

48. Ravel work in which the melody is passed among the instruments : BOLERO

Ravel’s “Bolero” is a remarkable piece of music, with a very insistent theme that just builds and builds with instruments being added to the mix as the piece develops. Famously, Bolero played a significant role in the 1979 film “10” starring Bo Derek, Dudley Moore and Julie Andrews. Not a bad movie …

The snow pea lives up to its name. It continues to grow when it is snowing.

14. “Jeannie Out of the Bottle” memoirist : BARBARA EDEN

Back in 1964, the second most watched show on American television was ABC’s “Bewitched”. Sidney Sheldon was tasked with the job of creating a rival sitcom and he came up with “I Dream of Jeannie”, which first aired in 1965 and starred Barbara Eden in the title role. The censors had a big say in how the story developed. For starters, Jeannie’s skimpy costume was permitted on air, provided that Eden didn’t show off her navel on the screen. Also, Jeannie was only allowed to live with an unmarried man as long as the story made it clear that she slept in a bottle.

“By Jove” is a mild oath that calls on the Roman god Jove, who is also known as Jupiter.

“Mac” is a casual and generic form of address to a man. The term comes from the Gaelic “mac” that is commonly used in Scottish and Irish names, and which means “son of”.