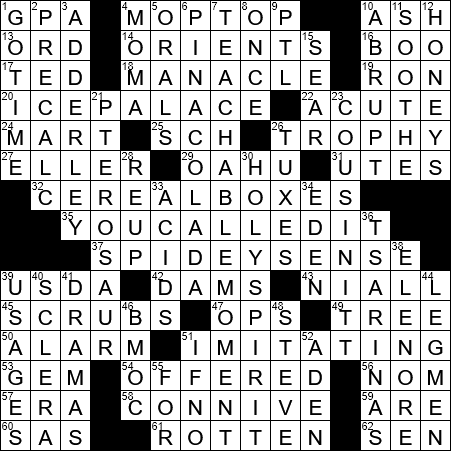 The classic Beatles haircut was called the mop top. Apparently John Lennon and Paul McCartney saw someone wearing the style in Hamburg, and they liked it. The pair hitchhiked from Hamburg to Paris, and when at their destination had their hair cut that way for the first time.

Author and journalist Ron Chernow is perhaps best known as a biographer. Chernow wrote about the lives of two US presidents, namely Ulysses S. Grant and George Washington. His biography of Founding Father Alexander Hamilton was adapted into the incredibly successful stage musical “Hamilton” by Lin-Manuel Miranda.

31. Natives for whom a state is named : UTES

“Spidey sense” is a phrase used to describe one’s intuition or instinct, especially when sensing something that might be dangerous. The term arises from the comic book hero Spider-Man’s ability to sense danger before others.

To connive is to conspire with, to cooperate in secret. The term comes from the Latin verb “connivere” meaning “to wink”, the idea being that connivers might give each other a sly wink.

4. Home of Dalí’s “The Persistence of Memory,” informally : MOMA

“Piña colada” is a Spanish term which translates into “strained pineapple”. The piña colada cocktail was introduced in the Caribe Hilton San Juan in 1954, and since 1978 it has been the official beverage of Puerto Rico. Yum …

“The PTL Club” was a daily television show hosted by televangelists Jim and Tammy Faye Bakker. PTL is short for both “Praise the Lord” and “People that Love”. The show ended its run of over ten years in 1987 when it was revealed that Jim Bakker was involvement in financial and sexual scandals. Bakker served 5 years in jail, part of an 18-year sentence.

The terms “tannic acid” and “tannin” are often used interchangeably, but strictly speaking this usage is incorrect. Tannic acid is a specific type of tannin, a tannin that doesn’t occur naturally in wines to any significant amount. Tannic acid can be added to wines as a clarifying agent, color stabilizer or even taste enhancer.

Here are some famous lines from William Shakespeare’s “Richard II”.

This royal throne of kings, this sceptred isle,
This earth of majesty, this seat of Mars,
This other Eden, demi-paradise,
This fortress built by Nature for herself
Against infection and the hand of war,
This happy breed of men, this little world,
This precious stone set in the silver sea,
Which serves it in the office of a wall
Or as a moat defensive to a house,
Against the envy of less happier lands,
This blessed plot, this earth, this realm, this England.

A tsarina was the wife of a tsar, and so was a Russian empress.

The Turtles were a Californian rock band active in the late sixties. The biggest hit for the Turtles was 1967’s “Happy Together”.

Netflix was founded in Los Gatos, California in 1997 as a DVD rental company that sent out titles by mail. Netflix no longer focuses on distribution by mail, and instead provides programming on demand. The company is now making a big player in the production of films and TV programs.