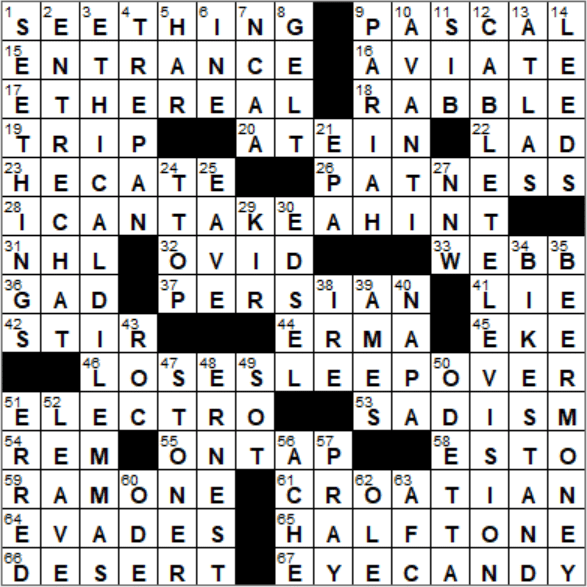 We’ve been calling youths “striplings” since the 14th century. The name probably originates from the description of a youth as a thin strip of a thing. I was a stripling, a long, long time ago …

23. Greek goddess of witchcraft and the underworld : HECATE

The Minnesota Wild is the only one of these seven teams that plays in St. Paul, while the rest play in Minneapolis.

Jack Webb played Sergeant Joe Friday on “Dragnet” on both TV and radio … and what a voice he had! Off the screen, Webb was a lover of jazz, and he played the cornet. It was within the world of jazz that he met and fell in love with Julie London, the famous singer with “the smoky voice”. The couple married and had two kids together.

37. Cat known as a Shirazi in the Mideast : PERSIAN

The word “ruckus” is used to mean a commotion, and has been around since the late 1800s. “Ruckus” is possibly a melding of the words “ruction” and “rumpus”.

Erma Bombeck wrote for newspapers for about 35 years, producing more than 4,000 witty and humorous columns, under the title “At Wit’s End”, describing her home life in suburbia.

53. Opposite of kindness : SADISM

“The Ramones” were an American punk rock band. The group formed in Forest Hills, New York in the mid-seventies. Arguably, it was the first punk rock group, defining the genre. Something else that’s not my cup of tea …

Halftone images are often seen in newspapers, or used to be. Such images are black and white, and are comprised of black dots. Even though the image is made using dots of complete black, various shades of gray are “created” by using varying sizes of dots.

In the world of ballet, a dancer performs an “entrechat” by jumping vertically into the air and rapidly crossing the legs before and behind.

A trepan is a boring tool used to sink mineshafts.

7. Awarder of billions in sports scholarships, in brief : NCAA

Our word “lucre” meaning “money, profits” comes from the Latin “lucrum” that means the same thing.

The Studebaker Avanti is a luxury coupe that was produced in 1962 and 1963. The Avanti is was unique in its day, being a personal car that was high-performance. It actually broke a lot of speed records on the Bonneville Salt Flats.

30. Car that’s an anagram of 14-Down : EDSEL
(14D. English industrial city described by Dickens as “an odious place” : LEEDS)

The mythical roc is a huge bird of prey, one reputedly able to carry off and eat elephants. The roc was said to come from the Indian subcontinent. The supposed existence of the roc was promulgated by Marco Polo in the accounts that he published of his travels through Asia.

Odetta Holmes (or just “Odetta”) was a singer and a human rights activist. She has been cited as an influence by such singers as Harry Belafonte, Bob Dylan, Janis Joplin and Carly Simon.

60. Its first part is called a strophe : ODE

In general terms, in poetry a “strophe” is a pair of stanzas with alternating form. So, a poem might be made up from a number of strophes, and twice that number of stanzas.