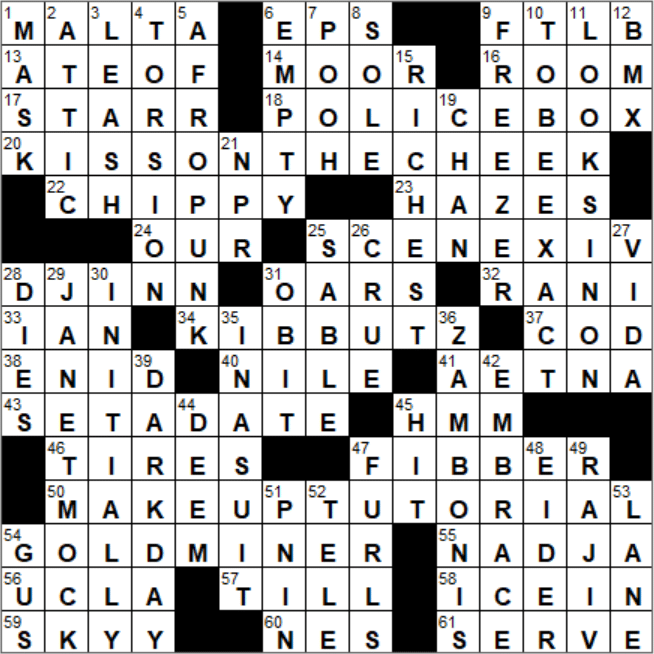 1. Island nation with a cross on its flag : MALTA

The foot-pound (ft-lb) is an imperial unit of work or energy. One foot-pound is the amount of work in applying a one pound-force over a distance of one foot.

The most famous recording of the song “War” was by Edwin Starr in 1970. It went to number one at the height of the anti-Vietnam War sentiment in the country, and became the song most associated with Starr. The song has also been recorded by the Temptations and Bruce Springsteen.

24. Part of the English translation of “Notre Dame” : OUR

“Notre Dame” is French for “Our Lady”.

25. Part of Act 4 of “Antony and Cleopatra” in which Antony attempts suicide : SCENE XIV

Depending on definition, the Nile is generally regarded as the longest river on the planet. The Nile forms from two major tributaries, the White Nile and the Blue Nile, which join together near Khartoum, the capital of Sudan. From Khartoum the Nile flows north, traveling almost entirely through desert making it central to life for the peoples living along its length.

54. One for whom a flash in the pan is a good thing : GOLD MINER

Grey Goose is a vodka that is produced in France. The beverage was developed especially for the American market using resources and expertise available in the French Cognac region.

3. Something a shepherd may have on : LEASH

The lovely German shepherd breed of dog isn’t one of the older breeds, and only dates back to 1899. German shepherds are the second-most popular breed in the US, after the Labrador retriever.

Sables are small mammals about two feet long that are found right across northern Europe and northern Asia. The sable’s black pelt is highly prized in the fur trade. Sable is unique among furs in that it feels smooth no matter which direction it is stroked.

“Livin’ la Vida Loca” is a 1999 single recorded by Ricky Martin, the title of which translates as “living the crazy life”.

The first ice resurfacing machine was developed in 1949 by one Frank Zamboni. The machine works by simultaneously executing a number of tasks. First, the surface of the ice is scraped off by a sharp blade. Next the ice is “washed” with water sprayed from the front of the Zamboni, and that wash water is vacuumed back up and filtered to remove impurities. Water is then reapplied to the scraped ice by a wet towel dragging behind the machine, forming a new skating surface.

Eiders are large sea ducks. Their down feathers are used to fill pillows and quilts, giving the name to the quilt called an “eiderdown”.

Rajiv Gandhi was the oldest son of Indira Gandhi, the Prime Minister of India who was assassinated. Rajiv took over the office of PM when his mother was killed in 1984. In the election that followed soon after the assassination, Rajiv Gandhi led his Congress Party to victory with the biggest margin in Indian history, capturing 411 seats out of 542, an incredible majority. He remained in power until he too was killed, by a suicide bomber while on the campaign trail in 1991.

“Pnin” is a novel written in English by Vladimir Nabokov, and published in 1957. The title character is Timofey Pnin, a Russian-born professor living in the US. “Pnin” raised some money for Nabokov, as it was published in installments in “The New Yorker” magazine. He needed the money while he worked hard to find someone to publish his more edgy novel, “Lolita”.

The original “Gloomy Gus” was a pessimistic character in newspaper comics in the early 1900s, who was introduced to the public by illustrator Frederick Burr.