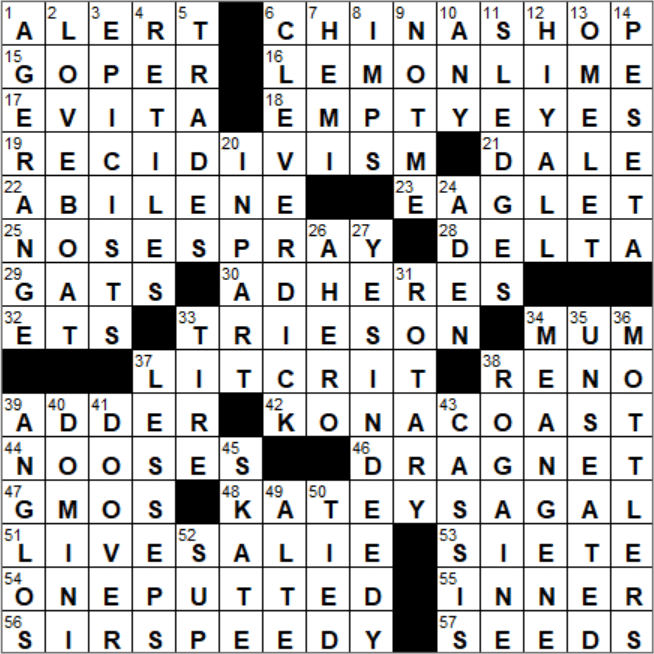 The idiom “like a bull in a china shop” has been around since the early 1800s.

17. “Another Suitcase in Another Hall” musical : EVITA

“Another Suitcase in Another Hall” is a song from the Andrew Lloyd Webber/Tim Rice musical “Evita”. The song is sung by Juan Perón’s mistress after Eva throws her onto the street. Scottish singer Barbara Dickson recorded the original version, which was released as a single in 1977. Madonna sang “Another Suitcase in Another Hall” in the 1996 film adaptation of “Evita”, even though she played Eva Perón and not the mistress.

About half of the fifty US states have “three-strikes” laws, statutes that mandate courts to impose harsher sentences on an offender who has previously been convicted to two prior serious offenses.

Abilene is a city in Texas located about 150 miles west of Fort Worth. The city originated at stop on the Texas and Pacific Railway in 1881, a place where cattlemen could load up stock for transportation. It was named for Abilene, Kansas, which was the endpoint for the Chisholm Trail at that time.

23. Avian epithet for Napoleon II, with “the” : EAGLET

“Gat” is slang for “gun”. The term is derived from the Gatling gun, the precursor to the modern machine gun. The Gatling gun was invented by Dr. Richard J. Gatling in 1861. Apparently he was inspired to invent it so that one man could do as much damage as a hundred, thereby reducing the size of armies and diminishing the suffering caused by war. Go figure …

Katey Sagal played Peggy Bundy on “Married … with Children”. Later she took over as star of the show “8 Simple Rules” in the middle of its run, when John Ritter passed away unexpectedly in 2003. More recently, Sagal appeared on the FX drama “Sons of Anarchy”. In 2004, she married Kurt Sutter who created the “Sons of Anarchy” series.

“Siete” is the Spanish for “seven”.

A “seeded” player or team in a tournament is one given a preliminary ranking that is used in the initial draw. The intention is that the better competitors do are less likely to meet each other in the early rounds.

2. Old TV show set on the Pacific Princess, with “The” : LOVE BOAT

“The Love Boat” TV series was born out of 1976 made-for-TV movie with the same title. The movie was which itself was an adaptation of a nonfiction book called “The Love Boats” written by real-life cruise director Jeraldine Saunders.

24. City where, according to legend, Cain and Abel are buried : ADEN

Rogaine is a brand name for the drug Minoxidil. It was developed as an oral medication to treat high blood pressure, but was found to have an exploitable side-effect. It caused an increase in the rate of hair growth. A topical solution was marketed to promote growth of hair especially in balding men. The drug seems to work well, but when the patient stops using it, things go back to normal in about 60 days. Wouldn’t dream of touching the stuff myself …

45. Relative of a stingray : SKATE

Skates (formally “Rajidae”) are a family of fish in the superorder of rays (formally “batoidea”). Skates look very similar to stingrays but they lack stinging spines.