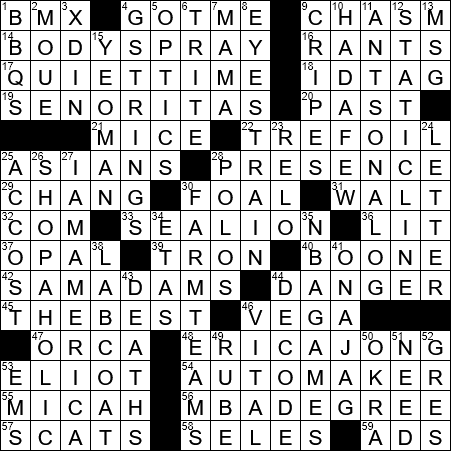 A trefoil is a symbol that appears like a trifoliate leaf, a leaf with three leaf-like parts.

30. It’s generally up and running within a few hours : FOAL

Walter White is the protagonist on the hit TV drama “Breaking Bad”. Played by Bryan Cranston, White is a high school chemistry teacher who resorts to manufacturing high-grade crystal meth in order to ensure his family’s security after his death.

37. Olympic Australis, for one : OPAL

Appalachian State University is located in Boone, North Carolina. The college campus is in the Blue Ridge Mountains at an elevation of 3,333 feet, making it one of highest universities east of the Mississippi River.

42. Brand with the slogan “Fill your glass” : SAM ADAMS

Samuel Adams beers (sometimes ordered as “Sam Adams”) are named in honor of the American patriot who played a role in the American Revolution and the Boston Tea Party. Samuel Adams came from a family associated the brewing industry, mainly involved in the production of malt.

The idiom “playing possum” means pretending to be dead. The phrase is used in recognition of the behavior of the Virginia Opossum that does just that, plays dead as a defense mechanism. We often use the term “possum” colloquially for the opossum species that live here in North America, but in fact, the true “possums” are marsupials native to Australia.

48. Author who wrote “Show me a woman who doesn’t feel guilty and I’ll show you a man” : ERICA JONG

55. Book in which the Israelites are rebuked for idolatry : MICAH

Monica Seles has a Hungarian name as she was born to Hungarian parents, in former Yugoslavia. Seles was the World No. 1 professional tennis player in 1991 and 1992 before being forced from the sport when she was stabbed by a spectator at a match in 1993. She did return to the game two years later, but never achieved the same level of success.

Today a ballot is a piece of paper used to cast a vote. Back in the 1500s, a “ballot” was a small “ball” used in the process of voting.

The origins of “G-string”, the type of revealing underwear, is unclear. However, the term “gee string” has been used since the 1800s and originally referred to the string that held the loincloths worn by Native Americans.

The term “parachute” was coined by Frenchman François Blanchard, from “para-” meaning “defence against” and “chute” meaning “a fall”.

15. Title figure in a Gilbert and Sullivan opera : YEOMAN

To accost is to confront boldly, and is a term that ultimately derives from the Latin “ad” meaning “to” and “costa” meaning “side, coast”. Originally, the term applied to warships that were attacking an enemy’s “coast”.

The word “jag” is used to describe periods of unrestrained activity, particularly involving alcohol, and has been in use since the 1800s.

“Carny” is American slang, and is short for “carnival worker”.

There are two letters M (ems) in the middle of the word “summer”.